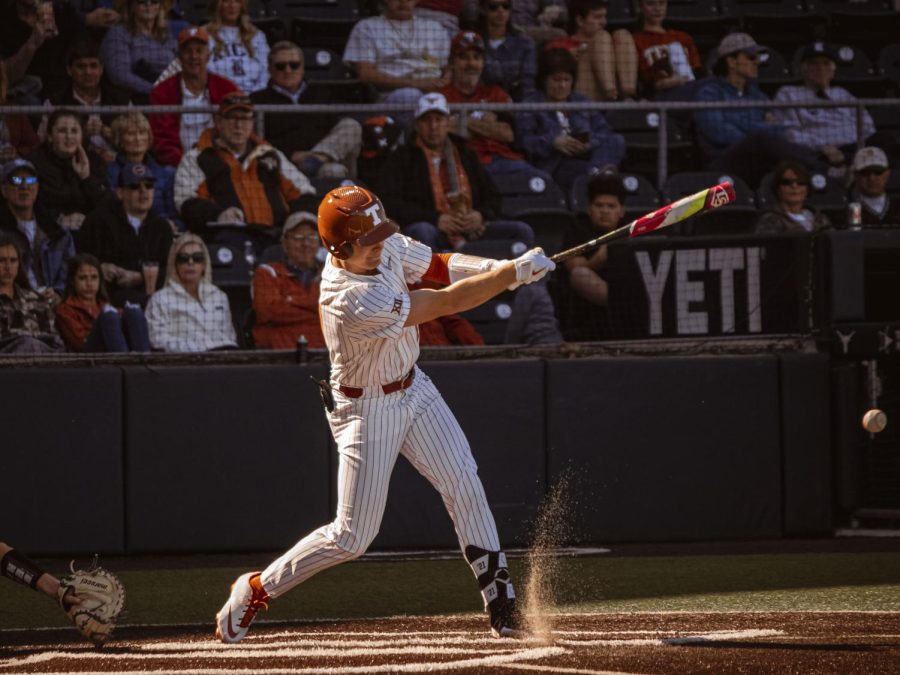 Texas batter Ivan Melendez hits a ground ball against Rice at UT's UFCU Disch-Falk Field on Feb. 26, 2022. Melendez was named 2021 First-Team All Big 12 Designated Hitter and All College World Series honors during his first season as a Longhorn redshirt sophomore.

The Daily Texan spoke with Chris Williams, baseball beat writer for The Daily Toreador at Texas Tech University, ahead of the No. 2 Longhorns and No. 16 Red Raiders weekend series in Lubbock.

Chris Williams: So obviously Tech had that tough Super Regional loss to Stanford last season and the really high preseason ranking from D1 Baseball. What do you think the expectations are for Tech’s season?

Daily Texan: Tech brought in a bunch of new faces on offense. I feel like their expectations are to get back to the regional final and host it in Lubbock again. I feel like they view last year as a lost opportunity. They had the College World Series in their hands on their home turf, and it didn’t happen. The goal is to bring the regional back to Lubbock.

CW: Similarly, Texas had a program-defining year last year. What players are responsible for that ranking that didn’t necessarily make that big of a mark last year?

DT: I definitely would say that Ivan Melendez is making such a large impact on this season, and he’s the guy that a lot of people know about. He was our designated hitter last year, he hits bombs. I mean, he’s gone viral a couple of times just this season. I think he has 10 or 11 homers on the year, but with Zach Zubia leaving last season, Texas had a vacancy at first base. He stepped into that role, and I don’t think he had played infield since his junior college days. Melendez has been really, really solid for Texas as a hitter but also being that rock in our infield, because Texas is known for their defensive season. And of course, your first baseman has to be good to get those easy put-outs.

I would also say Silas Ardoin, Texas’ catcher, has really stepped it up this season. He had been working really hard in the background on his batting, especially during the fall. And now he’s stepped up in this big power hitter role. You didn’t really see that as much last year. He had a grand slam over spring break in one of the games that we’re playing in South Carolina. He’s just this great defensive catcher, but he can also hit bombs.

CW: Yeah, definitely. And I have a follow-up about Melendez: what is different about him this year?

DT: Whenever it comes to batting, I don’t think much has changed other than being amplified. With Zack Zubia and Mike Antico leaving the program, Texas didn’t have very many big power hitters, which is why they had problems trying to figure out who would be in that four-hole spot after Melendez moved up to the three this season. With the changes, Melendez has kept consistency as the power hitter on the team. He’s a pest to strike out too, because he’s a real patient hitter and isn’t going to swing at anything.

Brandon Birdsell has received quite a bit of national attention from D1 baseball. What makes his pitching so tough?

CW: Birdsell kind of had his season last year cut short. I think in April he had to have shoulder surgery. Before, he was in some mock drafts (as) a fourth-round pick. He ended up dropping all the way to the 11th round. He’s trying to show that he still has his stuff following surgery. I think that’s what’s driving his performance this season.

DT: That sounds familiar to our Saturday guy, Tristan Stevens, because he wasn’t drafted at all. That kind of fueled him to come back this season and step into a big starting pitcher role, especially after Texas lost Ty Madden to the draft. I think that Stevens proved this season he has his stuff and that he is somebody that would benefit both a Texas and professional franchise. He’s still really hungry to win, too. I think Stevens and Birdsell will be interesting pitchers to watch over this series.

CW: So with Pete Hansen, what’s working for him? He obviously is a guy that came into the year with kind of huge expectations when he leapfrogged into that Friday starter role.

DT: Pete Hansen is just a dog. He has a perfect record on this season — he hasn’t lost a game. He has this great demeanor on the mound and is a real cool customer. Hansen is also a technician-esque pitcher. He’s not somebody that’s necessarily going to overpower you, Hansen doesn’t throw at 98 miles per hour or anything. But he knows how to command the strike zone and change the batter’s eye level. Like a lot of our pitchers, he’s also not afraid to pitch to contact because we have the defense to back it up.

CW: That’s very similar to Tech as well. Their defense doesn’t walk many batters. They’re not afraid for contact because they know that defense is pretty reliable.

DT: Tech’s story this season is just how powerful your batters are. Tech has guys like Jase Jung and DH Ty Coleman. Do you think that Texas is going to be able to keep them at bay?

CW: Jung has low homerun numbers this year, but he draws a lot of walks, albeit that is against weaker pitching competition. I don’t expect Pete Hansen to try to walk Jung obviously. It’ll be interesting to see how they do against a program that isn’t afraid to pitch to them. When Jung sees the pitch he wants, he’s gonna swing, and he’s gonna make contact. He leads the team in doubles.

Can you just talk a little about Murphy Stehly? I saw he got Big 12 Player of the Week.

DT: Murph is batting so well this season. Coach Pierce has talked about how, whenever Stehly came into the program, he wasn’t expecting him to be a guy that would be a four hole, DH type batter. Stehly is a utility player — Texas has had him at second base, third base and right field this season. But he was honestly one of the front runners for our DH position too. Stehly has just put a lot of work behind the scenes and now he’s a guy who can place the ball wherever he wants in the ballpark. He’s batting at .443. It speaks a lot on his character and how hard he has been working.

DT: So what are your predictions for this series?

CW: Tech is undefeated at home this year, so obviously I want to ride with them — it’s gonna be a huge crowd. But, you know, with the roster that Texas is going to put out there literally all three games, it doesn’t matter who’s on the mound there. I think Texas is gonna take one or two games and probably bring that undefeated home season to an end. But it’ll be interesting. You got a program that’s just dominant at home. I mean, Tech has outscored their opponents by 95 runs at home this season. It’ll be interesting to see a worthy opponent come in.