No. 2 Texas baseball drops series to No. 16 Texas Tech 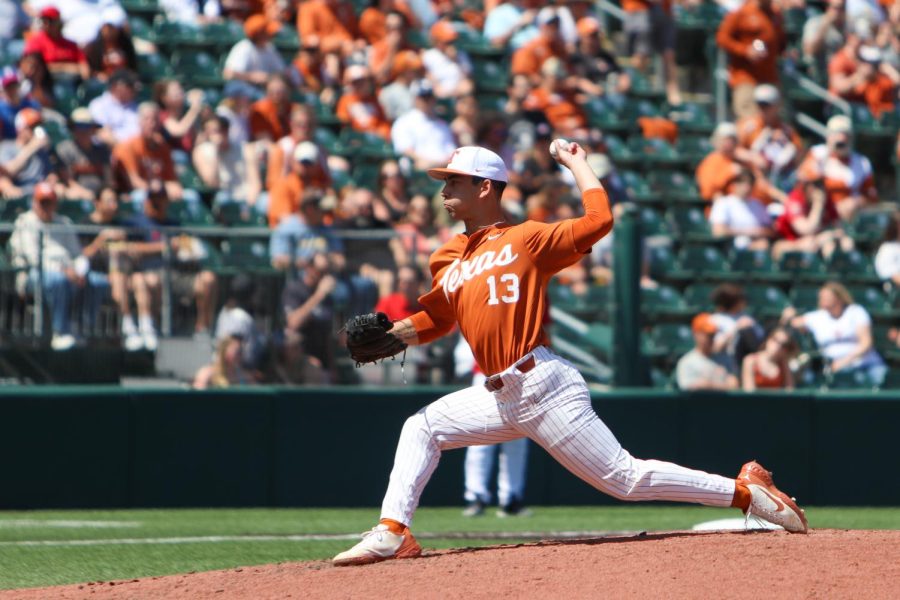 It is hard to win at Rip Griffin Park.

Known for being a “hitter’s paradise,” Texas Tech’s Dan Law Field has an uncharacteristically small outfield, with narrowed foul lines and wind that carries batted balls over the fences. The home run inflation proves frustrating for opposing pitchers and outfielders, who watch helplessly as balls float into the parking lot off ordinary swings.

“It is small, and the wind makes it seem even smaller,” said Chris Williams, the Daily Toreador baseball writer. “That’ll carry a couple balls over (the fence) that really shouldn’t.”

Texas Tech’s home ballpark also gets very loud — in their weekend series against Texas, rowdy Red Raiders fans packed the stadium with a combined 13,296 fans, a sellout weekend for the Raiders’ 2–1 series victory.

While No. 2 Texas dropped the first two games of the series, the Longhorns played flashy, competitive baseball all weekend long. Powered by strong hitting from redshirt junior infielder Ivan Melendez and redshirt senior infielder Murphy Stehly, the Longhorns capitalized on the agreeable hitting conditions in Lubbock. The three-hole and four-hole hitters combined for 18 hits, 11 runs and five homers in the series.

However, strong batting from Texas wasn’t a match for Texas Tech’s theatrics in Friday and Saturday’s 10th innings. Red Raider Kurt Wilson caught sophomore pitcher Aaron Nixon on a bad night Friday, stealing home to win the game. The senior followed this up with a grand slam off redshirt freshman pitcher Andre Duplantier II on Saturday.

Nixon’s outing as Texas’ premier closer remains a concern for Texas head coach David Pierce. Throughout the season, the preseason All-American has struggled with finding the strike zone, despite giving up no runs before this weekend.

“He hasn’t been sharp, and he’s living and dying by his slider,” Pierce said. “His goal right now is to really try to get his fastball (under) command.”

While Texas did not take the series away from the hometown favorites, the Longhorns stole the Sunday match in a seven-inning Big 12 mercy rule, handing Texas Tech its first home loss of the season by sophomore pitcher Lucas Gordon’s glove. The pitcher’s cool demeanor on the mound and commanding change up yielded seven strikeouts and three groundouts in the 12-1 win.

While the two heartbreakers in Lubbock are a tough pill to swallow for the Longhorns, Texas leaves Lubbock on a good note with plenty of upside proceeding the midweek matchup against Texas A&M and continued conference play against Oklahoma this weekend.