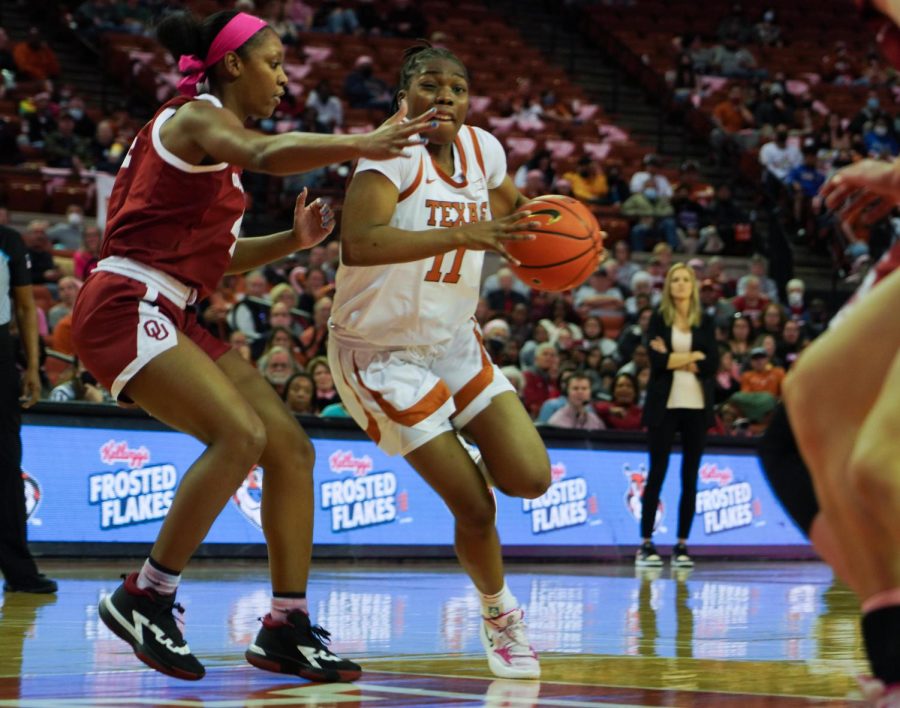 The 2022 Texas women’s basketball season came to an end in a hard-fought battle against defending champion and No. 1 seed Stanford in the Elite Eight of the March Madness tournament. The No. 2-seed Longhorns fell to the Cardinal 59-50. Texas ended their season with a record of 29–7.

“We left everything we had out on the floor,” Texas head coach Vic Schaefer said after the game. “These kids have made me a better coach. I’m so honored and privileged to have had the opportunity to coach them.”

Texas defended Stanford at a high level but ultimately had difficulty converting shots. The team shot 32.7% from the field and missed a total of nine free throws.

Despite these struggles, senior guard Joanne Allen-Taylor led the Longhorns in scoring with 15 points on 5-of-11 shooting. Freshman guard Rori Harmon and senior guard/forward Audrey Warren also scored in double digits with 14 and 11 points respectively.

“I am who I am today because I put on this jersey for four years,” Allen-Taylor said following what is likely to be her last collegiate game. “I just want to say thank you because even in defeat I am so blessed.”

Texas’ main obstacle throughout the game came in controlling the boards and creating second chance opportunities. Texas was outrebounded 45 to 28, and Stanford had twice as many offensive boards.

Additionally, the Longhorns struggled with the dominating height of the Cardinal’s interior defense. Stanford sophomore forward Cameron Brink used her 6-foot-4-inch frame to contribute six blocks of her team’s 11 blocks, all of which she did in the second half.

“You see her play, and you see how competitive she is,” Schaefer said about Brink. “She’s really aware.”

Brink also had all 10 of her points in the second half. Commanding play from Stanford’s forwards resulted in multiple Longhorns entering foul trouble. Senior center Lauren Ebo, who was matched against Brink, shot 0-of-6 from the field and only brought down three rebounds.

“I wasn’t a presence, and I take full responsibility for that,” Ebo said. “It’s physical down there. Each shot is not going to be easy.”

It was evident Texas was having difficulties when Stanford made an adjustment and switched to a 2-3 zone defense late in the third quarter. Turnovers proved to be costly for both teams. Texas forced twice as many turnovers as they gave up, with 20.

In the teams’ meeting at the beginning of the season, Texas came out on top. The Longhorns defeated then-No. 3 Stanford 61-56 in mid-November.

“You can’t ask any more from a team than what our kids did defensively,” Schaefer said. “We missed nine free throws, we missed some open shots. I mean, it’s just part of it.”

The loss marks the end of the 2021-22 season for the Texas women’s basketball team, yet with the success the team has had, it’s clear that this program is far from done under Schaefer.

It was Texas’ first time making back-to-back Elite Eight appearances in 32 years. That is what
Vic Schaefer, two-time National Coach of the Year, did in his first two years as coach of the Longhorns.

“This team is so great, and we did so many great things,” Harmon said. “We can’t really be upset about it.”