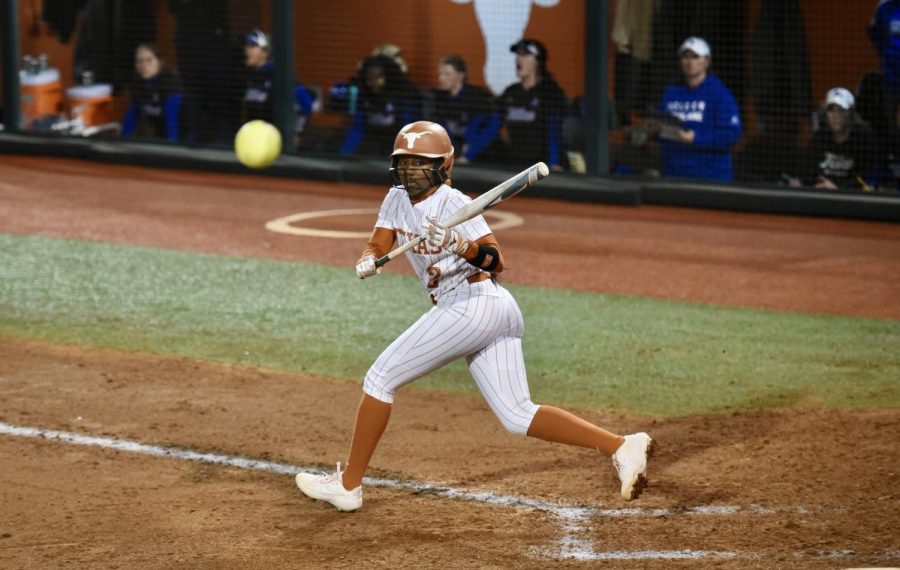 Texas softball is on fire.

The Longhorns swept the Jayhawks this weekend to open up conference play, combining hitting and pitching to outscore Kansas 27–10 across the three-game series. Texas’ unbeaten streak, which began March 6 and features one tie, now stands at 16 games. The series sweep also means that the Longhorns opened conference play undefeated and 3–0 for the fourth straight year.

Texas started off its series against Kansas on Friday in a nailbiter, winning 7–6. Sophomore shortstop Alyssa Washington had a great game at the plate, going 3-for-4 with a double, a homerun and three RBIs.

Sophomore pitcher Estelle Czech started the game on the mound, giving up five earned runs in 3.2 innings. After struggling in the middle innings, graduate transfer Hailey Dolcini came into the game in relief and allowed only one earned run for the remainder of the game.

Utilizing starting pitchers in relief is a trend that head coach Mike White has utilized more and more as the season progresses, often looking to his aces in Dolcini and freshman Sophia Simpson to finish out games. Consistent pitching was an issue in the early season, but White seems to be closer to figuring out the ideal rotation for this year’s team.

On Saturday, Texas won in convincing fashion, besting the Jayhawks 9–2 behind the bat of star senior Janae Jefferson. Jefferson went 2-for-4 on the day, hitting her first homerun of the season and reaching base four times after being walked twice.

Dolcini took the mound again in game two of the series but started this time around. She lasted 6.2 innings, allowing only one hit and giving up zero earned runs. In her past 26.1 innings, Dolcini has allowed only five hits and one earned run, returning to dominant form after having a 4.20 ERA in five games to start the 2022 season.

On Sunday, Texas put a firm end to the series, winning 11–2 and inducing the mercy rule after just five innings of competition. The Longhorns were propelled by a strong six-run first inning, as after the first two runs crossed the plate, sophomore outfielder Bella Dayton sent a ball soaring over the outfield fence for a grand slam. The blast gave Texas a commanding lead that it would ultimately convert into its 16th straight game without a loss.

Simpson took the mound in the series finale, allowing only one earned run in five innings of work against the Jayhawks. The Longhorns scored four runs in the top of the fifth inning to make it an 11–2 game, setting up Simpson to complete the game with a run-rule finish in the bottom half of the inning and an early trip to the buses for Texas.

The Longhorns have found their stride coming into Big 12 play, with their last loss dating back to March 5 against No. 5 Alabama in Tuscaloosa, an impressive feat for a team that struggled to string together wins in the early portion of this season.

Texas will be back in action Wednesday against the Louisiana Ragin’ Cajuns, a team that the Longhorns swept in Lafayette earlier this month. A date with the unbeaten Oklahoma Sooners looms on April 14, so the Longhorns will hope to keep their momentum through the next week and a half.