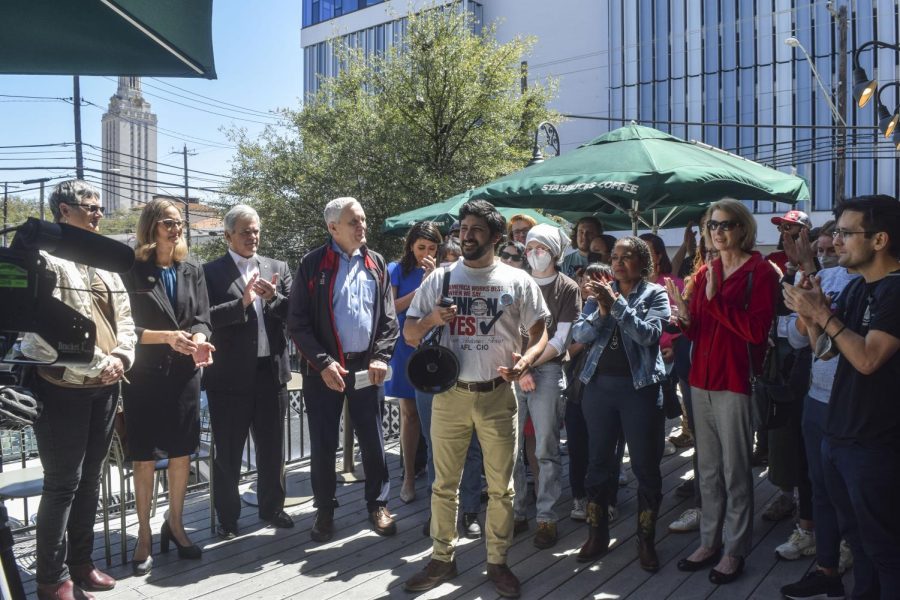 Editor’s Note: This article first appeared in the March 25, 2022 flipbook.

Starbucks employees announced their intent to unionize their 24th street store on March 7, becoming the first store in Austin to join the national trend. The employees have since gained the support of local and state leaders who held a press conference at the store on Thursday to express their solidarity with the organizers.

Union organizers at the West 24th and Nueces Street Starbucks cited issues with scheduling, wages and an “erosion of trust” in a letter posted on social media. Organizers said they want to unionize to advocate for better pay, scheduling, communication and COVID-19 policies.

Organizer Lillian K. Allen said employee work schedules should be posted three weeks in advance, but lately the schedules have been changed frequently without notice. He said this is a problem for the workers, since many of the employees are students who have other obligations outside of work.

“We’re all college students, so our life cannot revolve around our jobs, and sometimes it does, because sometimes that’s the circumstances that we’re in,” said Amanda Garcia, an organizer and sociology sophomore. “Do we go to class or do we risk getting fired from our job or being written up by not going to our shift?”

Allen said workers at the store received no verbal response from management after announcing their plans to unionize, but they found a letter posted in the back of the store from the district and area managers, which he said seemed disingenuous.

“We are listening and learning from the partners and the stores as we always do across the country,” a Starbucks spokesperson said. “From the beginning, we’ve been clear in our belief that we are better together as partners without a union between us and that conviction has not changed.”

“It’s that Texas spirit that we have to rebuild and it’s the Starbucks workers who are continuing to build that right here and right now,” Casar said. “We are going to be able to reshape this history of this state … and ban the anti-union tactics that we’re seeing corporations like Starbucks use.”

Natalie Wittmeyer, a volunteer with Starbucks Workers United, is assisting Texas stores with unionization and works at the nation’s first Starbucks to unionize in Buffalo, N.Y..

“My role with them has been guiding them through the steps both legally and emotionally,” Wittmeyer said. “Making sure that they’re prepared for the physical Labor Board part of the process, but also the emotional toll because it’s definitely hard to feel like you’re up against a ginormous corporation.”

Employee and organizer Sydney Collins said the employees understand they are a part of a bigger movement.

“We are unionizing not just to improve our conditions … but also, to hopefully push more stores into unionizing so that we can improve Starbucks on a systemic level,” said Collins, a Plan II and economics sophomore.

Employees from the Starbucks on West 45th and North Lamar Street also announced their plans to unionize in a letter posted on Twitter on March 21.

Community members are currently supporting the store’s unionization efforts by ordering their drinks under the names “Union Strong” or “Union Yes.” However, Allen said the best way for community members to offer support is by leaving comments in surveys they receive after mobile orders through the Starbucks app.

“Management reads those comments, and if anything is going to change Starbucks’ stance on unions, it’s not going to be us,” Allen said. “It’s going to be hearing from the customers.”

Organizers submitted union cards and a petition on March 11 to the National Labor Relations Board to hold an election for the store to officially unionize, which Garcia said she expects to pass when it’s voted on in six to eight weeks.