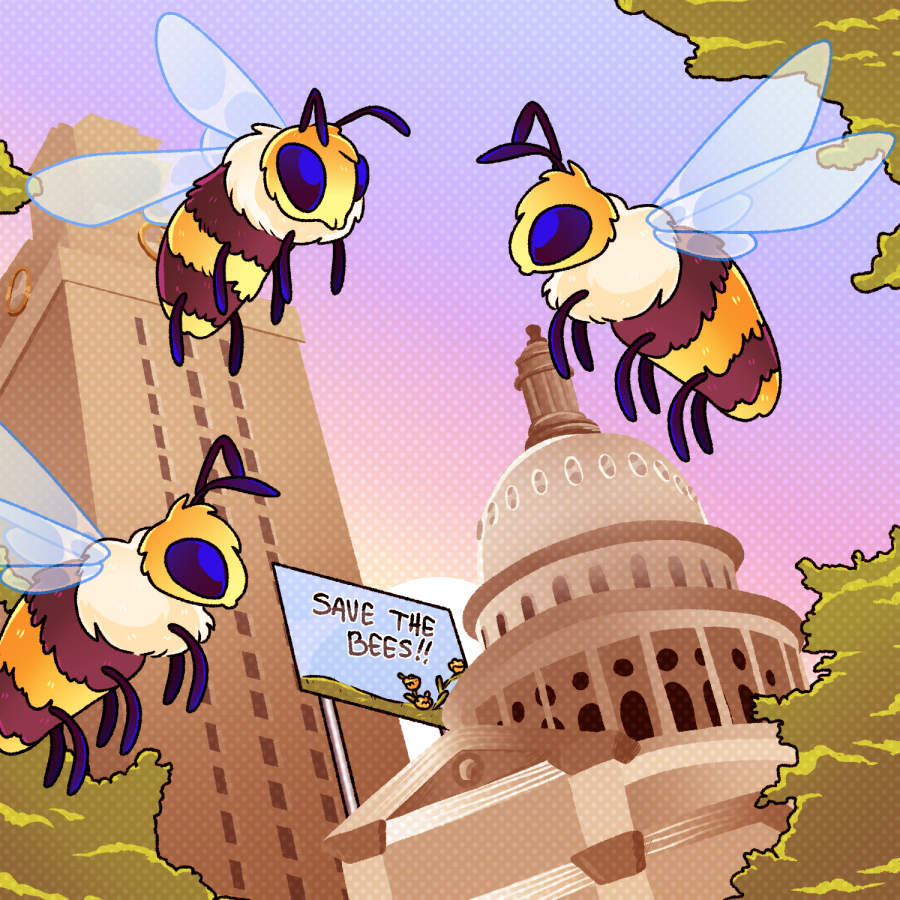 Editor’s note: This article was first appeared in the March 22, 2022 flipbook. The story was updated on March 29 to include that the city of Austin was accepted as an official Bee City.

Bee City USA, a nonprofit that works to promote bees in places across the country, approved the city of Austin as an official Bee City on Friday.

“With pollinator populations declining as a result of habitat loss, pesticide use and climate change, this designation not only supports conservation, but it also raises awareness to the urgency of protecting the species which keep our ecosystems intact,” said Council Member Vanessa Fuentes.

The Austin City Council voted unanimously to support a certification that will label Austin as a Bee City USA affiliate. UT’s Beevo Beekeeping Society attended the council meeting March 3 to advocate for the pollinators.

“It’s kind of cool that Beevo did it first,” said Tien, a neuroscience and Plan II senior. “It’s cool that UT got Bee Campus USA certified before Austin is getting Bee City USA certified.”

Tien said the two types of certifications, Bee Campus and Bee City, show devotion of energy and time to pollinators. These certificates include commitments to reduce pesticide usage and landscape and plant more native plants for native pollinators.

In order to become a Bee City, citizens must first form a committee, bring their plan to a government body, create a resolution and then agree to the commitments of being a Bee City, according to Bee City USA, an initiative of the Xerces Society. There are currently 152 Bee City USA affiliates and 132 Bee City Campus affiliates.

District 2 Council Member Vanessa Fuentes said a group of student advocates requested a meeting with her about becoming a Bee City. Fuentes said she was immediately on board after a conversation about protecting the pollinators and their habitats.

“Like many young individuals, I think we’re all worried about the state of our climate,” Fuentes said. “To know that this was an opportunity for the city council to show our commitment to addressing climate impacts … it made sense to me.”

Fuentes led the resolution with District 7 Council Member Leslie Pool. Fuentes said Austin would be the largest city in Texas to become a Bee City.

According to a press release from Austin City Council, the Austin Parks & Recreation Department started the Bee City USA application over two years ago and has been working towards the commitments listed on the Xerces website.

Becoming an official Bee City is important because it protects diverse habitats and is critical for the Austin food and agriculture systems, Fuentes said.

“It’s all interconnected,” Fuentes said. “Less than 1% of food is produced and grown here locally in Austin. We go outside elsewhere to get our food and that also has its environmental impacts and is not sustainable.”

People don’t have to be involved in Beevo or the certifications to help save the bees, Tien said. She said there are many ways to support local pollinators and the local ecosystem.

“One of the best ways to do this is to buy local honey,” Tien said. “Honey is the third most fake food in the world behind olive oil and milk.”

Sydney Kale, southwest campus organizer of Texas Student Public Interest Research Group, a public interest advocacy group, said she works with student volunteers to help them make change. Volunteers, including students from Texas Student PIRG and Beevo Beekeeping Society, worked with Parks and Recreation to make Austin a Bee City. Kale said the volunteers were the ones who got the City Council on board with the initiative.

“This is their program, not mine,” Kale said. “The students are the leaders, I’m just giving them the resources to be successful.”