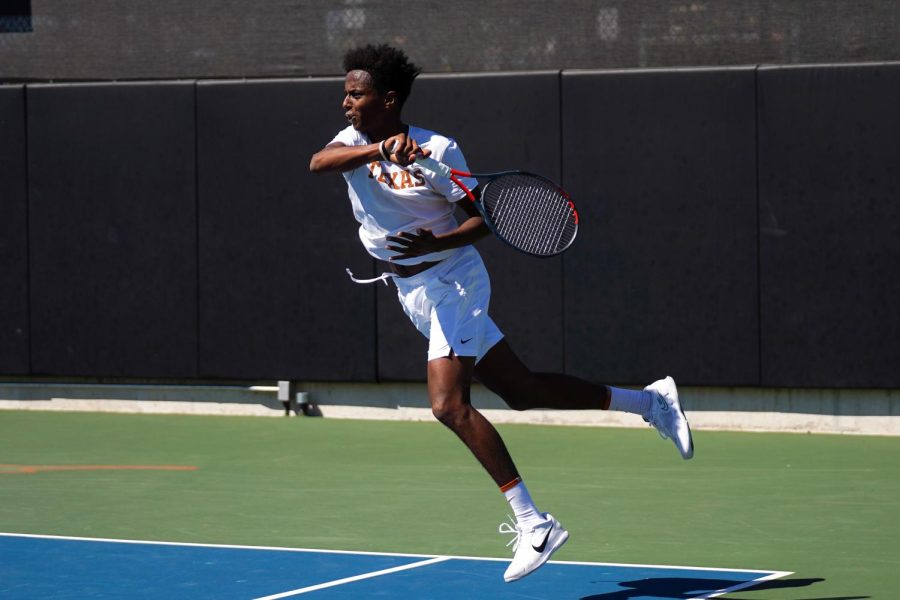 Texas men’s tennis bounced back after a defeat against Baylor on Friday with a 7-0 victory over Texas Tech.

The No. 11 Longhorns and the No. 40 Red Raiders have a long history that’s been dominated by Texas, featuring a 4-1 win in Lubbock last year and a 69–8–2 record.

Kicking off the doubles portion of the match, the No. 58-ranked doubles team of sophomores Eliot Spizzirri and Siem Woldeab rebounded after a close loss Friday, taking their match in an easy 6-3 victory. The doubles partners they faced, Ilgiz Valiev and Dimitrios Azoidis, are familiar faces for the Longhorns. The Valiev/Azoidis doubles team played together during last year’s Tech vs. Texas matchup where they took the doubles point away from the Longhorns.

This year, however, was different. After Spizzirri and Woldeab took a commanding win, the unranked duo of sophomore Micah Braswell and junior Chih Chi Huang finished off their opponents to give Texas the ever-important doubles point.

Sunday’s match marks the third time in four games that Texas has taken the doubles point away from a ranked opponent. Earlier in the season, head coach Bruce Berque noted the team’s struggles in taking the coveted first point of the game, but, since then, the Longhorns have noticeably improved in that portion of the match.

No. 23-ranked duo of senior Richard Ciamarra and redshirt sophomore Cleeve Harper have found consistent success this season, but the other two teams have had trouble showing up throughout the year. Today’s match, however, showed the impact Berque has had on the team in the duos department. Ciamarra and Harper did not complete their match because of the strength of the other two duos. With Spizzirri nearly fully recovered from his injury and Braswell and Huang getting better by the day, the Longhorns seemed to have turned around one of their biggest weaknesses of the season.

Spizzirri in particular had a great day against the Red Raiders. After quickly taking a revenge doubles point away from Tech, Spizzirri dismantled sophomore Olle Wallin in the three spot, winning both sets 6-2 and again being the first to finish. Spizzirri, who has been battling a left hand injury, found his groove in the past couple of weeks. The No. 66-ranked singles player will have a chance to crack into the top 50 players once updated rankings are published April 6.

Similar to Spizzirri, freshman Pierre-Yves Bailly has bounced back after injury and performance struggles in the past month. Though Bailly is still ranked as a top 20 player in the nation, he had not been able to collect a win since Texas’ upset defeat against Florida back in February. Bailly’s Sunday win against sophomore Reed Collier marks his first victory since returning from injury. Despite the struggle, the Longhorns’ stars shone as usual Sunday, with Braswell dominating the field in the one spot. Braswell defeated Tech’s only ranked singles player, No. 109 Issac Arevalo, to continue his season. Braswell seems primed to enter the top 20 rankings after his one-loss two week stretch. Braswell’s 2-0 win gave the Longhorns their fourth and series-clinching point, solidifying a win over the rival Red Raiders.

Texas rode the moment from the early four points to end up with a 7-0 victory, an important bounce-back win after its 6-0 defeat against Baylor. Harper, Huang and Woldeab all finished off their opponents, with only Woldeab dropping a set. The 7-0 victory caps off the fifth perfect game from Texas this season, but the first since defeating UCF on Feb. 13.

Texas also faced the University of Texas-Rio Grande Valley in a Sunday doubleheader, and the Longhorns still found success despite the tough schedule. Texas quickly took the doubles point and three singles by Woldeab, and sophomores Eshan Talluri and Evin McDonald. The win capped off a successful 11-0 day for the Longhorns, and Texas looks to ride its wave of momentum into Fort Worth, where it will face No. 3 TCU.