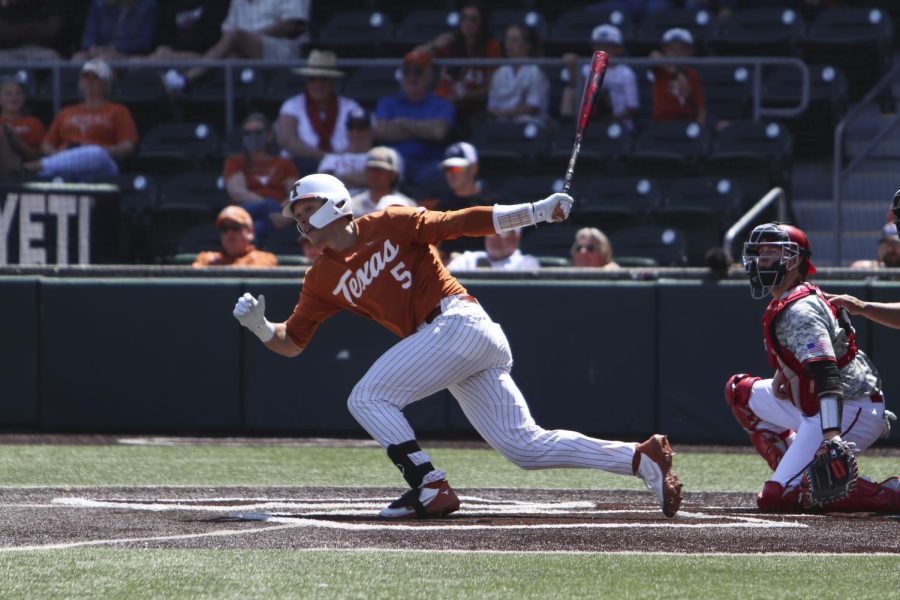 Skyler Messinger knows that hitting slumps do not last forever.

Messinger, a redshirt senior and transfer from Kansas, pressured himself to produce behind the plate more leading into this season. A 2021 All-Big 12 Second Team honoree, Messinger said he wanted to come in and contribute right away as the new guy on the team.

Yet after Texas’ series finale against South Carolina on March 13, he was sitting at a .191 batting average, well shy of his team leading .324 average at Kansas last season.

“You want to come in, especially as a new guy on the team, and contribute. It’s tough not to do that,” Messinger said. “When you’re looking back on (slumps), you look back and think of them as a good thing because you come out of them as a better player.”

Head coach David Pierce said Messinger’s recent turnaround at the plate reminds him of outfielder Mike Antico last season. Besides both donning the No. 5 jersey for Texas, the two players also shared early season hitting struggles after coming in as graduate transfers.

A transfer from St. John’s, Antico was batting roughly .200 at this point of the season for the Longhorns last year before improving into a key contributor for the offense.

Pierce likes how Messinger has been working hard since the first day of practice and has played great defense, even through the offensive slump. The third baseman has yet to record an error this season.

“His character has shown to be really strong, and I think that is why we’ve started to see him come out of (the slump),” Pierce said. “He’s an incredible young man and a good teammate. I think he’s a great piece right now.”

Messinger credits Texas’ coaching staff, specifically assistant coach Troy Tulowitzki, for helping him make adjustments to see the ball better. A Colorado Rockies fan growing up, Messinger said one of the biggest factors that led him to Texas was the opportunity to play under Tulowitzki, a five-time MLB All-Star who played for the Rockies from 2006-15.

“He was always who I tried to model my game after,” Messinger said. “To be exposed to (his knowledge) and being able to learn as much as I possibly can from him has been unbelievable.”

Messinger said another reason he came to Texas was for a chance to play in Omaha. Transferring from Kansas, which finished last season ninth in the Big 12, Messinger admits that he’s looking forward to no longer playing the role of the underdog.

As No. 8 Texas enters the halfway point of the season, only time will tell if Messinger is able to help secure a Big 12 championship for the Longhorns like Antico did last year. Messinger though, said he looks forward to being the “hunted” team in Big 12 play.

“It’s definitely a different mindset, but we’re ready to go and we’re playing good baseball,” Messinger said. “We’ve got a good team and I am excited to see what we are going to do.”