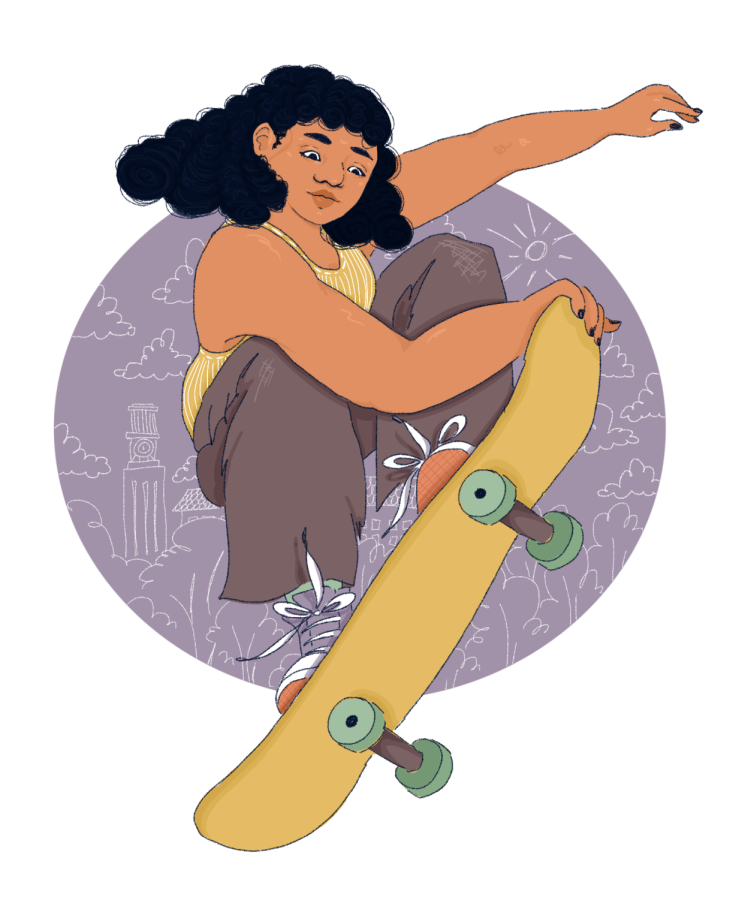 Pushing forward off the ground, Victoria Lara slid her weight to the tail of her board, placing one foot toward the front. Following the YouTube tutorials she’d long since memorized, Lara lifted her knees to her chest, carrying her board in the air and landing swiftly on the ground. After five months of bruised skin and scraped elbows, ollie trial run 2,054 was a success.

The environmental engineering senior described the achievement as one of the best moments she’s experienced on a board.

“It’s really satisfying to work so hard on a trick and land it after the work put behind it,” Lara said. “It makes you feel confident and independent.”

In the hopes of fostering a stronger, more inclusive skating community at UT, Lara and radio-television-film senior Simone Greer established the unofficial club Texas Skate Mates to provide a safe place for women who may want to pursue the historically male-dominated sport. The group regularly skates around Gregory Gym until late hours, practicing and learning new tricks. Pending its approval to become an official UT club, the Texas Skate Mates communicates through GroupMe, which includes more than 100 skaters and grows larger every day.

“It’s a really supportive group that makes you feel very welcomed,” Lara said.“(Skateboarding has) taught me to be more confident in myself, to push myself and try new things. It can be really scary at times, but it’s (exhilarating) to see what you can do and overcome those fears,” Lara said.

Like Lara, Sarah Darbar, an astronomy and physics sophomore, said skateboarding transformed her life, helping her get out of her comfort zone, make friends and discover the on-campus skating community.

“I used to be super shy and introverted, but skating makes you face your fears head on,” Darbar said. “It makes you throw yourself into the unknown and do things you wouldn’t normally do.”

However, Darbar said diving into the male-dominated skate world wasn’t easy. Even when she’s in the groove of ollies and kickflips, Darbar said the environment doesn’t feel welcoming for women.

“The guys in the skating community can be really toxic,” Darbar said. “You’re perceived differently. You have to prove yourself to be a female skater, and it makes you want to find people you can relate to.”

Lara, who shares a similar experience to Darba, said she hopes Texas Skate Mates offers an escape from discomfort and a safe space for women skaters.

“Skating while being a girl can be difficult, especially if you’re a beginner because most (people) in the skate parks are only dudes, which is intimidating,” Lara said. “A lot of the time they don’t take you seriously just because you’re a girl. It makes for a stressful environment that can be hard to learn in.”

After creating online content and videos for Texas Skate Mates, Anna Altamirano dove into the skating world herself. After finding the on-campus skating community increasingly male-dominated, the theater and dance and radio-television-film senior said she hopes her content motivates other women to engage in skating and the on-campus community.

“Everybody wants to help each other out,” Altamirano said. “It’s confidence building and community engaging. There’s always going to be a new thing to experience with someone while skating.”