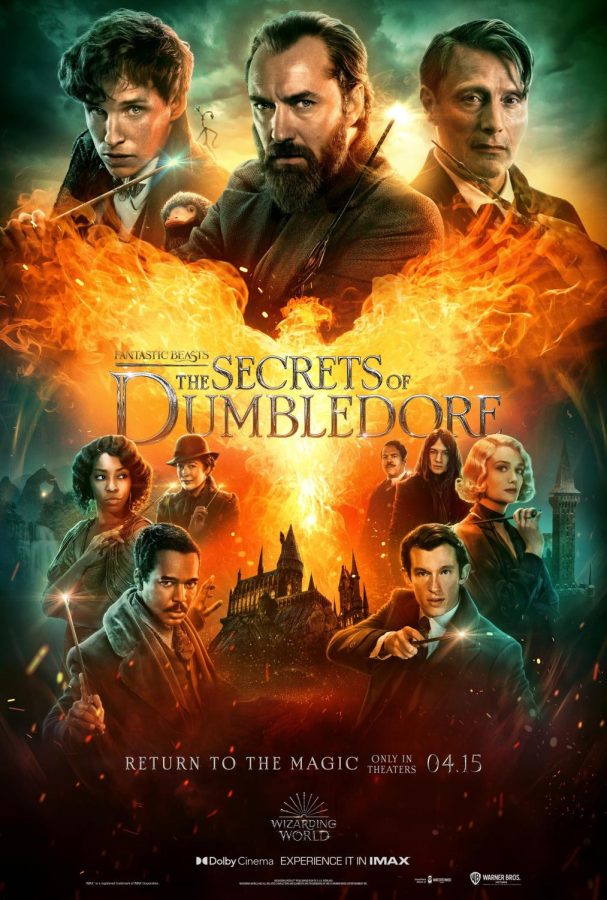 The latest installment to the Wizarding World: “Fantastic Beasts: The Secrets of Dumbledore,” apparates onto Muggles’ screens worldwide April 15.

Based on a fictional textbook from J.K. Rowling’s “Harry Potter” franchise, the third movie in the “Fantastic Beasts and Where to Find Them” series follows Albus Dumbledore’s (Jude Law) team of wizards and Muggle Jacob Kowalski (Dan Fogler) as they attempt to stop Gellert Grindelwald (Mads Mikkelsen) from rising to power. Because of Dumbledore and Grindelwald’s blood oath, which bars them from harming one another, Dumbledore tasks Magizoologist Newt Scamander (Eddie Redmayne) to lead the team.

While Potterheads anticipated the new release for years, the long wait does not live up to the usually aweing cinematic experience of other franchise films. Instead, Jacob’s humor, Newt’s bashfulness, and bowtruckle Pickett and the Niffler’s loyalty to Newt carried the movie. The spotty CGI effects, slow pacing and lack of impactful emotional scenes left “The Secrets of Dumbledore” not up to par with its predecessors. After controversy surrounding Johnny Depp led to his role as Grindelwald being dropped, fans worried about who would take over Grindelwald’s role. Mikkelsen’s portrayal of the villain lacked authenticity, and his enunciation left the audience cleaning out their ears in attempts to make sense of his mumbling.

While the CGI looked great with the magical creatures, it was painstakingly obvious in scenes featuring Hogwarts. The new beasts, such as a bloody disgusting amalgamation of a crab, spider and scorpion, added another level to the other creatures fans already have familiarity with. Qilins, animals capable of choosing a true leader with a pure heart for magicians, were integral to the plot, tying the series back into the “Fantastic Beasts & Where to Find Them” textbook. A new book Portkey revealed stunning imagery of swirling pages Ravenclaws would die for.

Though these complex magical elements looked believable, the scene panning over Hogwarts’ iconic grounds looked grainy and unrealistic, and the one scene in the Great Hall made it obvious the actors were walking in front of a green screen.

Despite its faults, as the title hints, the film finally gave Potterheads a glimpse into the mysterious headmaster’s past. The “Harry Potter and the Deathly Hallows” book briefly touches upon Grindelwald and his relationship with Dumbledore, while the “Harry Potter” films completely glaze over the material. Looking into Dumbledore’s past allowed Potter fanatics to get to know the beloved wizard even more.

John Williams’ “Hedwig’s Theme” threaded throughout the film brings comfort to viewers, in addition to small Easter eggs like “The Monster Book of Monsters” making an appearance. Even though the latest film from the Wizarding World might not be up to the original “Harry Potter” series’ standards, fans should still catch up with the developing plotline seemingly leading up to an epic battle between Dumbledore and Grindelwald in the following releases.

3.5 points for Hufflepuff out of 5