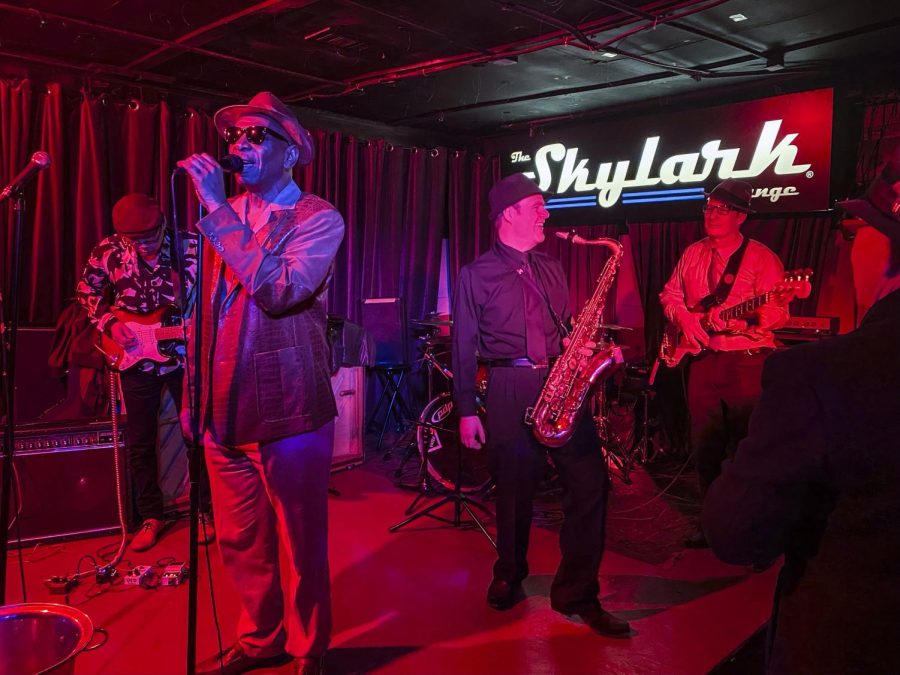 Editor’s Note: This article first appeared in the April 1, 2022 flipbook.

On any given evening, eccentric personalities and unique sounds find their way to Airport Boulevard’s Skylark Lounge stage. The vivacious crowd struts and bops to the rhythm for hours at the foot of the stage, soaking in the jazz, soul and blues music of Soul Man Sam and his backing band who are bathed in vibrant red lights. People crowd into the dimly-lit room, taking in the ambiance — some wearing cowboy hats and boots, others in Arc’teryx jackets and Allbirds shoes.

This is a typical night at Skylark. While the lounge’s eclectic effervescence came about organically, owners Mary and Johnny LaTouf said the diversity is a result of the rich history of East Austin and the building it occupies.

“(We focused) on the diversity of the artists we have on our stage,” Mary LaTouf said. “The decision to make sure that Black artists are represented and have an important place on our stage (was conscious).”

Skylark’s sound manager Lee Redfield said East Austin was historically deemed “Black Austin” because the city was legally segregated until the 1960s. As a result of its location, the Skylark is rooted in Black culture and history. Additionally, the building was formerly a lesbian bar called Bernadette’s. Because of this history, Mary said she intentionally fosters a safe community for the Black and LGBTQ+ community at Skylark.

Mary said each musician who performs is hand picked to preserve Skylark’s eccentric and free spirit. When the LaToufs bought Skylark in 2013, they delayed their opening so that Miss Margaret Wright, a well-respected Black singer and pianist, could perform. Wright was the first person on their stage, and she played every week until the COVID-19 lockdown in 2020.

“She represented that spirit of talent and true generosity on the stage,” Mary said. “You can’t put those things on a profit and loss statement. Those are things that you feel when you walk into a club.”

Skylark’s general manager Phil Rome said he’s proud of Skylark’s “melting pot of diversity” and the good, musical energy that its music provides. Rome, who started as the general manager when the lounge reopened after the initial pandemic lockdown, said he’s excited to continue expanding on what Skylark stands for.

“A lot of Black people (have) not experienced Black musicians in Austin because they don’t feel like they have a place to go to experience Black music,” Rome said. “I want to capture Black music and diversity not only with the musicians, (but also by) hiring more people of color (to work) behind the bar.”

Jack Bravo, molecular biosciences postdoctoral fellow, plays as a bassist for TT Brown and the Soul Expressions, a regular band at Skylark. He said their band’s frontman, TT Brown, embodies the “Skylark character.”

“(He’s one of those) really interesting, unique figures (who’s) been around the Austin soul and blues scene for a long time that tend to flock to Skylark and other similar places,” Bravo said.

During their last show, Bravo said TT Brown invited a man with a briefcase filled with 20 harmonicas tuned to different keys up on stage. Previously, Bravo said the band has added a singer that they found after randomly inviting her up on stage from the Skylark audience.

Health promotion sophomore Joshua Seillier, who’s made the trip down to Skylark, said the lounge offers a wide variety of music, people and experiences.

“It’s easy to go to spots in Austin where you look around and feel like everyone there has been copied and pasted,” Seillier said. “It’s a lot easier to get behind an establishment (like Skylark) that (promotes) diversity and culture.”