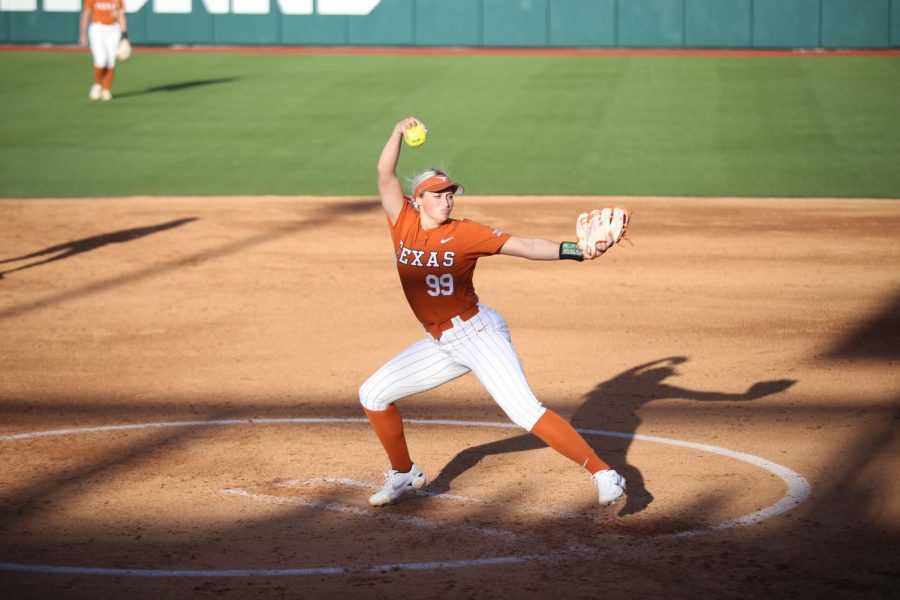 On an otherwise chilly Wednesday night at Red and Charline McCombs Field, the Longhorns’ lineup brought the heat as Texas softball notched 14 hits in a 14–4 run-rule victory over UT-Arlington in five innings.

Despite the final score, it took the Longhorns several innings to solidify their lead versus UT-Arlington, as the Mavericks jumped out to an early 2–0 lead in the first inning.

UT-Arlington played exceptional small-ball, as junior center-fielder Reagan Hukill put down a perfect sacrifice bunt to move two baserunners into scoring position for the first out of the inning. This led to a two-run RBI single from senior first-baseman Meagan Smith with two outs, giving the Mavericks their first and only lead of the ballgame.

Texas only gave up six hits in the ballgame, but the four runs scored by UT-Arlington largely came down to free passes. The Longhorns’ defense needs to sharpen up if they are to remain in the race for the conference title.

“I think we’re bunching runs together, we’ve given up a lot of walks,” head coach Mike White said. “We can’t do that, especially with the top teams coming up on our schedule (in) Oklahoma, Oklahoma State. They’re going to feast on those types of things.”

While the defense as a whole left something to be desired, the offense put on a show against the Mavericks on Wednesday night. Five Longhorns had multi-hit games, with star freshman infielder Mia Scott leading the way with four RBIs of her own. Anytime the Mavericks found a way to push a run across, Texas answered back to push its lead even higher.

Texas might be on a high right now, winning 19 of its past 21 games, but the schedule heats up quickly after this weekend’s break. Texas faces the only other undefeated teams in Big 12 conference play back to back, taking on No. 1 Oklahoma at home next weekend and No. 7 Oklahoma State the following weekend on the road.

“We started off on the road, we’re going to finish on the road, so hopefully we do better the second time around,” White said. “All of these games are important, they mean something … we’re trying to qualify for the postseason.”

Texas’ next two series are especially crucial in its race for the Big 12 crown, so keeping focus over this weekend’s break is at the forefront of White’s mind.

“If we continue to do what we’re doing and see good pitches … it’s not going to be a big deal,” White said. “I am aware of which way it could go. Either way though, I just want to make sure we’re prepared against Oklahoma.”

Texas will kick off the next iteration of the Red River Rivalry in a sold-out bout on April 14 at 6 p.m. at Red and Charline McCombs Field.