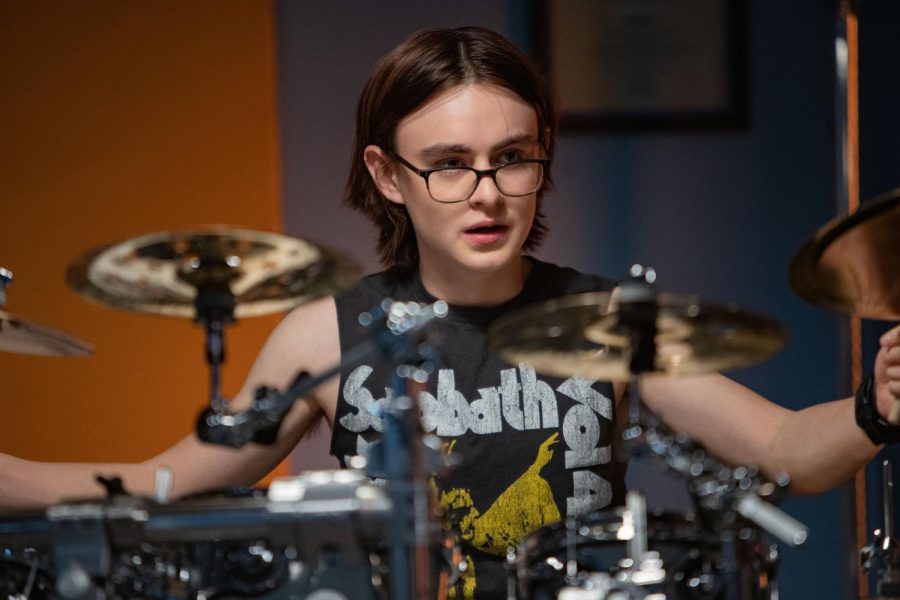 “Metal Lords,” a heavy metal coming-of-age dramedy from writer D.B. Weiss (“Game of Thrones”) hits Netflix today, April 8. The music-infused film stars Jaeden Martell (“IT,” “Defending Jacob”), Isis Hainsworth (“Emma.”) and the debut performance of Adrian Greensmith. “Metal Lords” follows three high-schoolers struggling to fit in. As the annual battle of the bands approaches, the trio work through their ups and downs to heal their relationship in time for the performance.

The Daily Texan attended a virtual roundtable interview about the film to speak with star Martell and writer Weiss.

The Daily Texan: What was the process like learning to become a metal drummer?

Jaeden Martell: The process was a lot of fun. I’d never really touched the drums, but for about a month before shooting, I was working on it everyday with this teacher Glen Sobel, (a) super talented drummer. It was also not only about the technical side of it and learning the instrument from scratch. I was also studying other drummers in the metal scene, how they perform and how they interacted with the crowd. As a drummer, it’s such a physical instrument, and you put so much energy into it. It’s such a satisfying process to learn and get better.

DT: What was it like filming the scenes where your character performs the drums in front of an audience?

JM: It was one of the most satisfying things I’ve ever done, to be that physically into something. I was sore, had bruises on my legs, cuts on my hands (and) my snare drum was covered in blood. I just felt so invigorated and exhausted. I had never done anything like that. I’m not familiar with theater, so in a way, I feel very uncomfortable performing in front of other people. There was a whole crowd, and there’s so much pressure on our musical performances. Doing this whole other thing in front of a bunch of people was a huge challenge but also felt good to overcome it.

DT: You’ve written in a variety of genres, so what brings you towards a certain genre or story you want to work on?

D.B. Weiss: It’s hard to know what makes one story resonate with you and another one fail to do so. Life is high school — the place where you really start to become who you are as an adult and get set on the path you’re going to follow. To me, high school stories have always had a special resonance. I’ve never done one before. It’s a specific kind of a movie I can always watch from beginning to end no matter the quality level. If it’s great, I’ll watch it. If it’s the worst high school movie ever made, I’ll watch that too. This was an opportunity to make a high school movie that made sense to me, that spoke to the stuff I love and some of the experiences that I have. When it comes to why this story vs. any other story, that’s a really good question, but ultimately, it’s about finding your way in the world … It’s something that is both very specific to the music in the movie in this case, but it’s also something that extends beyond that, too.

DT: What was your writing process for this film?DW: I have a tough time writing when music with words is playing, so it’s a very small bullseye to find music that sounds like this music but has no words. Especially with metal, when they are singing the words, they’re really not just singing words. The words are not meant to give you the headspace to think of other words … There is an all-instrumental metal band called The F—ing Champs. It’s just 18 guitar tracks going at once with this really intricate, fun and funny old-school type metal vibe … They were in that tiny little bullseye of music that embodied the spirit of the movie but also didn’t have any words to get in the way of (what) I was trying to write.