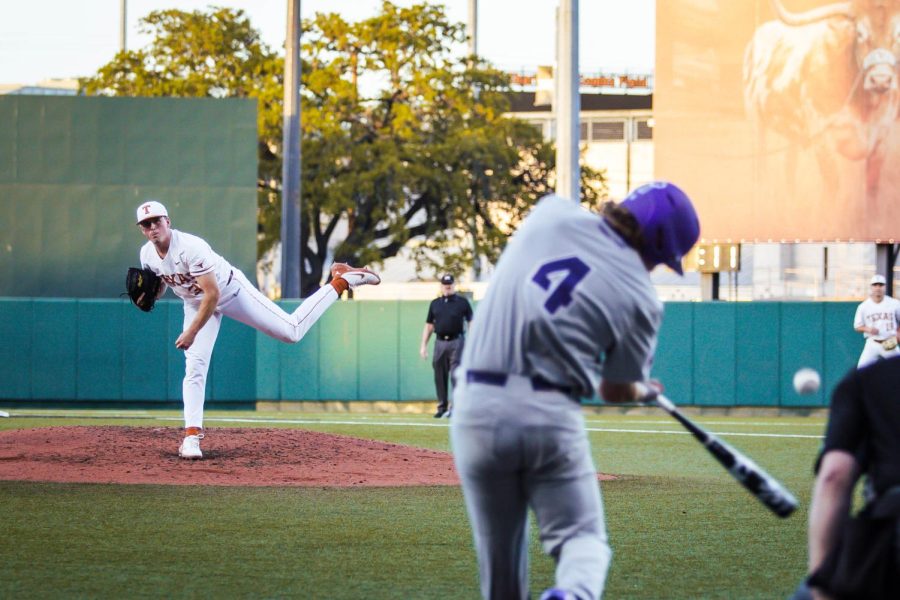 Following two straight shootouts, scoring 12 and 13 runs against Oklahoma and UTRGV, No. 7 Texas engaged in a defensive struggle during Friday’s series opener against No. 23 TCU.

While pitching was phenomenal for both squads, Texas redshirt sophomore Pete Hansen’s dominant outing powered the Longhorns to a 2-0 victory in their conference home opener.

For the first time in his career, Hansen threw a complete game. The Texas southpaw ace stifled the TCU offense, throwing 12 strikeouts in 114 pitches. The Horned Frogs failed to score a run Friday, mustering just two hits and one walk through the nine innings.

“(Pete) didn’t try to waver from what the game plan was,” head coach David Pierce said. “They were going to have to prove they could handle what he was doing. Just a great job of execution.”

The Longhorn starting pitcher threw 12 strikeouts in eight innings last week against Oklahoma, only allowing two hits and two walks in a performance that earned him Big 12 Pitcher of the Week.

With some of Hansen’s extended family in the stands of the UFCU Disch-Falk Field, Hansen admits that he was amped up from the start.

“It’s a big game against a rival,” Hansen said. “I know some guys on the team who have a lot of family in town. It was a big deal for me so I was going to leave it all out there.”

Hansen credits the coaching staff for steadily improving his conditioning throughout the last two seasons. In his last two starts, Hansen threw a combined 231 pitches.

“As a starting pitcher, you have to pace yourself, and I feel like I have done a good job of that,” Hansen said. “My arm feels great and I am ready to rock next week.”

TCU pitcher Riley Cornelio had a perfect game until redshirt sophomore Douglas Hodo III drew a walk to lead off the fourth inning. Redshirt senior Murphy Stehly followed with a single that glanced off of Cornelio’s glove. A groundout from redshirt sophomore Silas Ardoin would bring Hodo home, giving Texas its first run of the game.

After walking a Horned Frog batter and giving up a hit, Hansen found himself in a jam during the sixth inning with runners on first and second and only one out. He then delivered a pitch that painted the corner of the strike zone, striking out the TCU batter.

In the next at-bat, Hansen forced a groundout ball to Mitchell Daly, ending the TCU threat and the inning. Almost all of the listed 7,482 spectators were on their feet for the full count pitch.

Redshirt sophomore Trey Faltine doubled to left field off of Cornelio to lead off the seventh inning. After Faltine stole third base, the shortstop would score off of a fielder’s choice to extend the Longhorns’ lead to 2-0.

Pierce said his team scored its second run because of Faltine’s decisiveness in the seventh inning.

“I like him having that freedom,” Pierce said. “Trey is not afraid to play baseball. If he is going to make a mistake, it’s going to be with aggression.”

With the win, the Longhorns improved to 23-9. Texas and TCU will play each other again Saturday evening, where the Longhorns look to take the series victory and improve on their 4-3 conference record.