No. 11 Texas men’s tennis wins doubles point, drops 4 straight in singles to loss to No. 1 TCU 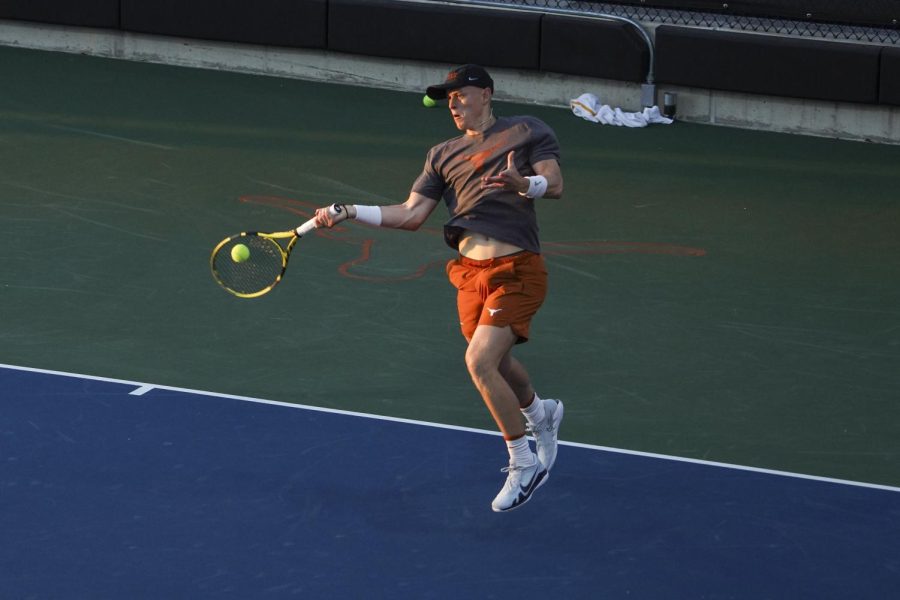 No. 11 Texas traveled to Fort Worth to take on No. 1 TCU Saturday but fell short after two impressive doubles wins in a 4-1 loss to the top-ranked team in the nation.

The two sides have split their last four meetings, but the Horned Frogs notched a 4-0 sweep over Texas in the second round of the ITA Indoor Championships in their only meeting this season.

The Horned Frogs boast one of the top doubles teams in the country: No. 2 Luc Fomba and Jake Fearnley. But senior Richard Ciamarra and redshirt sophomore Cleeve Harper also jumped up in the rankings all the way to number 3. The two heavyweights went back and forth, with each team breaking the others’ serve early in the set. The next break of serve came at 5-4, giving the Longhorns the win, 6-4, and evening doubles at 1-1 after sophomore Evin McDonald and junior Chih Chi Huang lost 6-1.

The decider came down to sophomores Eliot Spizzirri and Siem Woldeab, who were recently ranked No. 33. The pair took on No. 11 Sander Jong and Lui Maxted of TCU. Spizzirri and Woldeab found themselves in the same position as line 1 did, up 5-4 with a chance at a set point. But Woldeab’s return fell inches wide of the line, making the score 5-5. The set would wind up in a tiebreaker, where Spizzirri’s serving and Woldeab’s net play helped the Longhorns win, 7-6 (3).

Taking the doubles point was huge for the Longhorns because it meant they only had to win three of the six singles matches instead of four.

However, the Horned Frogs were ready for that challenge. No. 89 Woldeab lost a closely-contested first set to Jake Fearnley, 6-4. After losing serve in the first game of the second set, it was clear Woldeab wasn’t in the right headspace. He lost the second set 6-0, bringing TCU back even.

No. 62 Spizzirri lost his first set 6-4, but handed it to No. 10 Juan Carlos Aguilar in the second set. It was all Spizzirri as he coasted by 6-0 to force a deciding third set. Aguilar broke halfway through the third set, giving him a 4-2 lead over Spizzirri. TCU didn’t squander their advantage, and Aguilar ended up winning the final set 6-3.

Texas’ loss at line 2 wrapped up the match with TCU taking the overall 4-1. Line 1 with freshman Pierre-Yves Bailly would go unfinished. Bailly took the first set and was up 6-5 in the second, one game away from beating No. 18 Fomba. Huang’s match was also unfinished, with TCU winning the first set but Huang up a break in the second.

A great win at doubles proved inconsequential in the grand scheme of things, as Texas couldn’t get going in singles and dropped four straight to the Horned Frogs.

Unless the two meet in the Big 12 tournament or NCAA tournament, this was the last meeting between the two teams this season. As of now, the Frogs seem to have the Longhorns’ number.

Texas finishes the regular season with a pair of road matches in Oklahoma, where the Longhorns hope to gain some momentum for the postseason.