No. 7 Texas baseball pieces together 7-3 victory over No. 23 TCU to win series 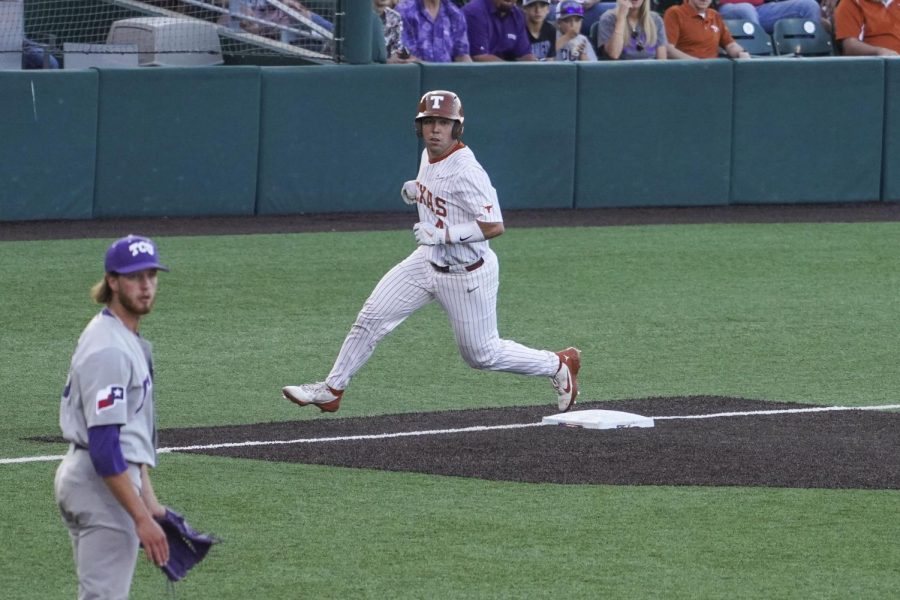 Longhorn fans were hungry for baseball after No. 7 Texas played four of its last five series away from Austin. Returning to their home field, the weekend series against No. 23 TCU drew 21,911 combined spectators — the fourth-most for a three game series in UFCU Disch-Falk Field history.

Texas won the series finale 7-3 on Sunday, clinching the series win over TCU. With the victory, the Longhorns improved to a 24–10 record and a 5–4 record in Big 12 play.

“I just think our league is top to bottom,” head coach David Pierce said. “Us being 5–4 is not exactly where we want to be, but we’re still in a good spot. That’s how you have to look at it, the strength in the marathon.”

A mound visit from catcher Silas Ardoin and Pierce settled down pitcher Lucas Gordon in the second inning after the sophomore gave up a run to TCU. Gordon got out of the inning with two consecutive strikeouts.

“I liked his approach of trying to be aggressive, getting strike one and trying to work down in the zone,” Pierce said.

But the Longhorns did not enjoy their lead for long. Gordon threw a wild pitch in the top of the fourth, allowing a Horned Frog base runner to score from third and tie the game.

A week after his return from injury, redshirt senior Austin Todd stepped up to the plate for Texas in the sixth inning. Todd delivered, driving the baseball right over the Longhorn logo in center field.

Todd’s single gave the Longhorns a 3-2 lead the team would not relinquish. The designated hitter finished with three hits on the day.

Coming back from an injury in his sixth year with the program, Todd said he has a “get to” attitude, rather than a “have to” attitude.

“It’s a blast being with these guys,” Todd said. “That’s why I came back. Being with this team and these coaches is not something everybody gets to do in their life.”

After Gordon’s day ended in the bottom of the sixth, Pierce turned to the bullpen to close out the game. The combination of redshirt freshman Travis Sthele, redshirt sophomore Justin Eckhardt and redshirt junior Coy Cobb only allowed three hits in the final ten outs, with TCU scoring a solo home run in the eighth inning.

Although the Texas bullpen has struggled at times this season, Ardoin said he thinks the group of relievers is slowly starting to come together.

“They’re coming out there and attacking the zone like we want them to,” Ardoin said. “I think that’s been a big difference, and I expect them to get a little bit better every day.”

Texas will return to UFCU Disch-Falk field Tuesday night to play Stephen F. Austin before heading to Kansas State on Thursday for a conference series.