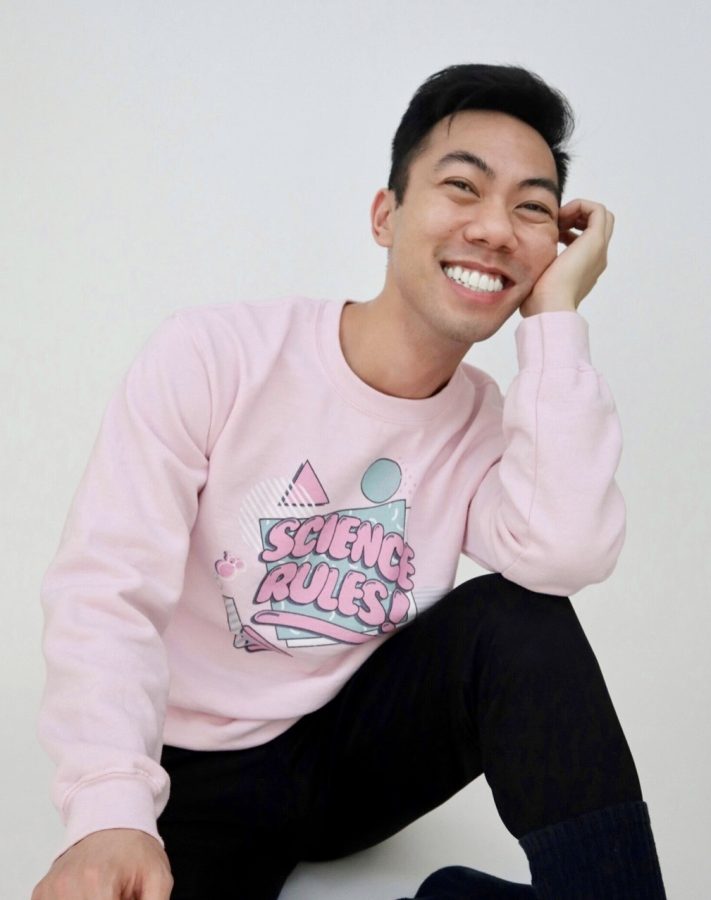 After a long day of lab work, Darrion Nguyen returns home to relax and partake in his favorite hobby — filming TikTok videos.

With 538.1K followers on TikTok (@lab_shenanigans) and 109K followers on Instagram, Nguyen — a STEM influencer — posts informative and comedic videos based on his science and lab work. Since creating his science-positive social media platform and clothing brand “Lab Shenanigans,” Nguyen now seeks to expand his career in the media industry. While Nguyen never expected his rise to fame, he said he takes pride in his growing platform and hopes to continue to encourage STEM students for years to come.

After graduating from UT in 2017 with degrees in both biochemistry and theater, Nguyen became a research technician at Baylor University before pursuing his Ph.D. at Rice University. Nguyen said social media helped him through the hecticness of his medical studies.

“A way for me to relieve a bit of stress and cope was to make these silly videos on Instagram,” Nguyen said. “Eventually, I made my own Facebook page, (which) essentially served as a dumping ground for all of my silly videos I made in the lab.”

Over time, Nguyen said he became viral on social media mainly with his “Lab Shenanigans” account, which inspires others to become more involved in the STEM field. Though he originally saw his future laying in academia, Nguyen said his growing success led him to wanting to pursue the entertainment industry after receiving his doctorate.

“This was never (on) my to-do list in life,” Nguyen said. “If you had asked me back in 2017, ‘Where do you see yourself for the next five years?’ I probably would have said grad or medical school. But, it is really snowballing, and I have been having so much fun with this — it has changed the trajectory of what I want to do.”

“Going into STEM was very intimidating, especially when you go to UT because it’s a very large school and has a lot of accomplished faculty and students,” Monso Marza said. “I was looking for a community I could connect with (and) other people who are feeling the same way that I was. Lab Shenanigans provided that community for me.”

Kim Khoo, a medical student at the University of Texas Medical Branch in Galveston and a friend of Nguyen, said she looks up to Nguyen as someone who always remains true to his work.

“He’s unafraid to be himself in person, and he’s also hilarious,” Khoo said. “I’m not surprised he blew up on social media.”

Khoo said Nguyen’s strong work ethic and casual comedy motivate her and his viewers to stay positive despite the difficulty of studying STEM or medicine.

“He’s a ball of energy, just like candy, like Pop Rocks,” Khoo said. “He’s really energetic and unexpected, but sweet and also a little sour.”

Hoping to eventually move onto the big screen, Nguyen said he wants to create his own television show similar to a modern Bill Nye the Science Guy. Nguyen said he advises students to take advantage of undergraduate school and work towards finding their passions.

“(I’m) encouraging everyone to take one step at a time,” Nguyen said. “ It’s so tempting to compare yourself to your classmates and think, ‘They’re doing more than I am. I’m not good enough.’ Maybe on the outside they look put together, but who knows, maybe inside they don’t have it all together. And that’s okay.”