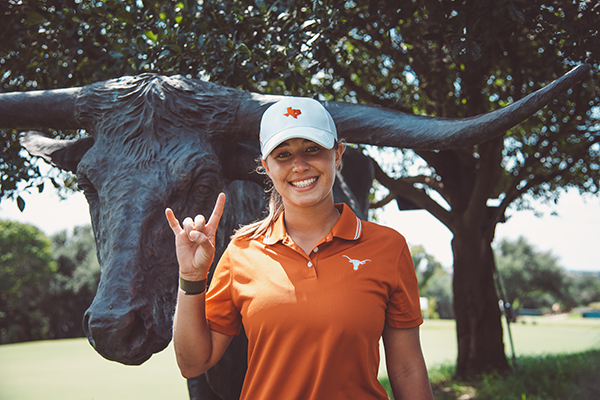 Sophomore Bentley Cotton’s ability to recover after a slow start led the Longhorns to a tie for third place finish at The Bruzzy.

No. 13 Texas women’s golf traveled to Fort Worth to compete in The Bruzzy, hosted by the University of North Texas at the Waterchase Golf Club. The course is 6,277 yards long for a par of 72.

The Longhorns competed against several other ranked Big 12 teams, including No. 7 Oklahoma State, No. 17 Baylor and No. 21. Texas Tech.

After the first round of play, the Longhorns found themselves in fifth place with a score of 294. Graduate student Brigitte Thibault and junior Sophie Guo led Texas, both recording scores of 72, putting them tied for 13th place individually.

In round two, sophomore Bentley Cotton recorded seven birdies for a score of 68, pushing her into twelfth place, after scoring a 75 in round one. Cotton’s play helped the Longhorns move into a tie for fifth place when the first day of the tournament was suspended for darkness.

Cotton, an Austinite and Westlake High School product, had her career best finish earlier this season at the Lamkin Invitational and tied for sixth place.

In the final round of play, Cotton continued her strong play with eight birdies. Cotton finished the tournament with a final score of 209, with scores in each round of 75, 68 and 66, putting her in fourth place individually, for the best finish of her career so far.

Guo also recorded three birdies in a row on holes 11, 12 and 13. With two more birdies throughout the tournament, Guo finished with a total score of 220, in a tie for 28th place.

The Longhorns will head to the Big 12 Championship tournament on April 22 in Houston, Texas.