Micah Braswell pushes to the top in Texas tennis 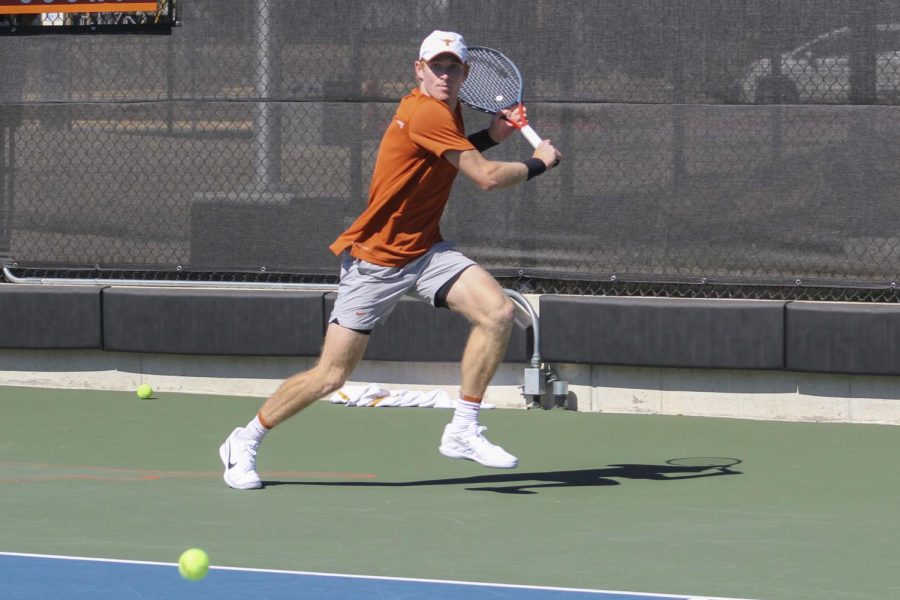 Even before becoming one of the best college tennis players in the country, sophomore Micah Braswell found himself surrounded by tennis champs who helped him through early struggles.

At the age of 12, Braswell suffered what would be the first of two stress fractures to his vertebrae.

“That was when I was really feeling myself start to improve,” Braswell said. “It was really tough for me and my dad. It took us a while to figure out.”

Braswell’s tennis career started when he was five. With coaching from his father Ty, a former player and assistant coach for the Florida State Seminoles, Braswell quickly found a love for the game.

Alongside his father, Braswell found a second mentor in his young tennis career: former top-five player Jimmy Arias. When Arias wasn’t working as a commentator for the Tennis Channel, the former pro helped Braswell throughout his childhood.

“Just knowing that he was on top of the game helps me really trust whatever he has to say,” said Braswell. “He’s been a great mentor for me my whole tennis career.”

With the help of his father and Arias, Braswell rose to the top of the ITF junior rankings.  He reached the number one recruit spot in the country, according to the Tennis Recruiting Network. Riding his success as a junior player, Braswell committed to his father’s alma mater, Florida State.

“I’d grown up going to camps at Florida State, and I love that school,” Braswell said.

“He started recruiting me a little bit,” Braswell said. “Being able to meet Bruce (Berque) and realize (his coaching skills) was the biggest attraction.”

“I’ve known Micah for several years before starting at Texas,” Wagner said. “I saw the vision of him being an excellent college player and nurtured that along the way.”

With the guidance of Wagner, the leadership of head coach Berque and the ability to play with other standout players, Braswell was hooked. Entering the team his freshman year, he wasted no time establishing his place, becoming a staple of the Longhorn lineup his first year. Braswell won the first nine matches of his career and finished out fall play winning 12 of 13.

“Coming in, I feel like there wasn’t a lot of pressure on me,” said Braswell, “I was able to have a really good first semester even during COVID.”

Braswell rode his early success into one of the most prolific freshman seasons in Texas tennis history. He finished as the Big 12 Freshman of the Year as well as Second-Team All-Big 12, all while helping the Longhorns make the Tennis Final Four.

Braswell attributed his success to his work ethic and the help from both Wagner and Berque.

“They’ve really focused a lot on the mental part of my game,” Braswell said. “They’re pushing me in practice every day to play like I’m going to play in the matches.”

Wagner has witnessed the improvement in Braswell’s game over the past two years as well.

“His mental toughness, his resiliency, his attitude has improved drastically,” Wagner said. “He’s also (gotten) stronger, but overall, his mental game has improved a lot.”

Because of injuries to previous first-in-the-order singles player Eliot Spizzirri, Braswell was thrust into the top spot as just a sophomore. He dropped his first match against unranked UTSA but persevered through the struggles.

“There was some doubt that crept in after the match,” said Braswell. “Instead of letting myself go that negative way, I just kept working really hard.”

Braswell did work hard, and the results came through. In the number one spot, Braswell has enjoyed multiple high-ranked wins.

“He’s playing some of the best players in the country, and he’s winning,” Berque said. “He’s done a lot better job in the last couple of months of establishing a base with his game and reducing the errors he makes.”

Alongside an extremely strong season in singles, Braswell has played on all three positions with Chih Chi Huang, with two undefeated games in the two-spot.

Braswell looks to ride his success into a strong end of the season, and the player, hoping to crack the top 20, will be a key to the success of the Longhorns in their tough Big 12 schedule.