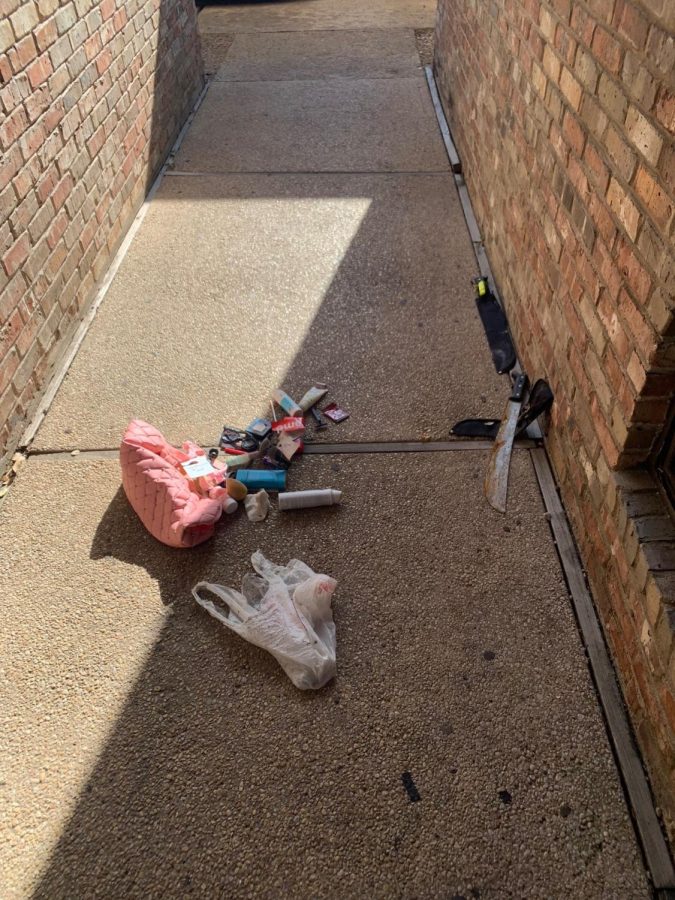 Residents of a West Campus apartment building on 28th Street and Rio Grande Street encountered a disturbing scene on Friday, March 25 as they started their day: a machete next to a purse with spilled toiletries.

The rusty machete was abandoned in the corridor between the parking garage and the entrance to a courtyard, an area that has a constant flow of people, said resident Marissa Galicia. APD detective Marcos Johnson said police located the machete and it was “taken care of” at 7:11 a.m. Friday, but multiple students reported seeing the machete in its place later that day and APD incident reports indicate that the scene was not addressed until 10:15 p.m. on Friday.

Galicia, an international relations and global studies and Latin American studies junior, said she first saw the scene at 10 a.m. and immediately called her friend, who advised her to call 911. After contacting APD, an operator told her someone would be there soon, Galicia said.

An engineering senior who asked to remain anonymous said she saw the scene around 11 a.m. and texted the UTPD tipline. She said UTPD responded to her quickly, saying it was out of their jurisdiction and referring her to the non-emergency number 311.

The 311 operator asked the senior if the weapon was accessible to children and if someone could possibly get hurt. She said yes, which led the operator to immediately transfer her to 911.

When Galicia left for work around 1:45 p.m., she said the machete and purse were still there. Galicia said the scene was still intact when she checked later that day at 6 p.m., 8 p.m. and 10 p.m.

Galicia said a group of people were surrounding the scene and calling the police at 8 p.m. She said one of them told her they had called multiple times over twelve hours.

“They told him that there were more serious emergencies at hand,” Galicia said. “Ours wasn’t a priority at the time because … there wasn’t an actual crime scene.”

On Saturday and Sunday, the Daily Texan called and emailed UTPD and APD, but received no response, even from the after-hours number, until the next business day — Monday.

The Daily Texan was in contact with detective Marcos Johnson from APD, who originally said there were no records of any 911 call from the area of 28th and Rio on March 25.

Johnson told The Daily Texan an hour later that officers responded to an abandoned property call for a machete at 7:11 a.m. on March 25, contrary to what residents reported. He provided the case number 22-0840339 — one that does not exist within the APD incident reports database.

After The Daily Texan brought up the inaccuracy, Johnson located another call from 8 p.m. on March 25 regarding a machete. He then sent the case number 22-0841380 — another case number that did not bring up a case in the APD database.

“However, there is a note in the call that (the machete) was taken care (of) by another officer earlier that morning,” Johnson said in an email.

The Daily Texan then found case number 2022-841574 in the database, which matches the location and times residents say they called 911. When asked about this case number, Johnson said it was the same as the prior case numbers he provided earlier. However, the time on the working case number, 10:15 p.m. on March 25, did not match up with the times Johnson provided.

Galicia said apartment complexes should provide security in case there is a situation and APD does not respond.

“It’s just kind of worrisome,” Galicia said. “That if something were to actually happen, if there was something actively happening, that (APD) might take a long time to respond.”