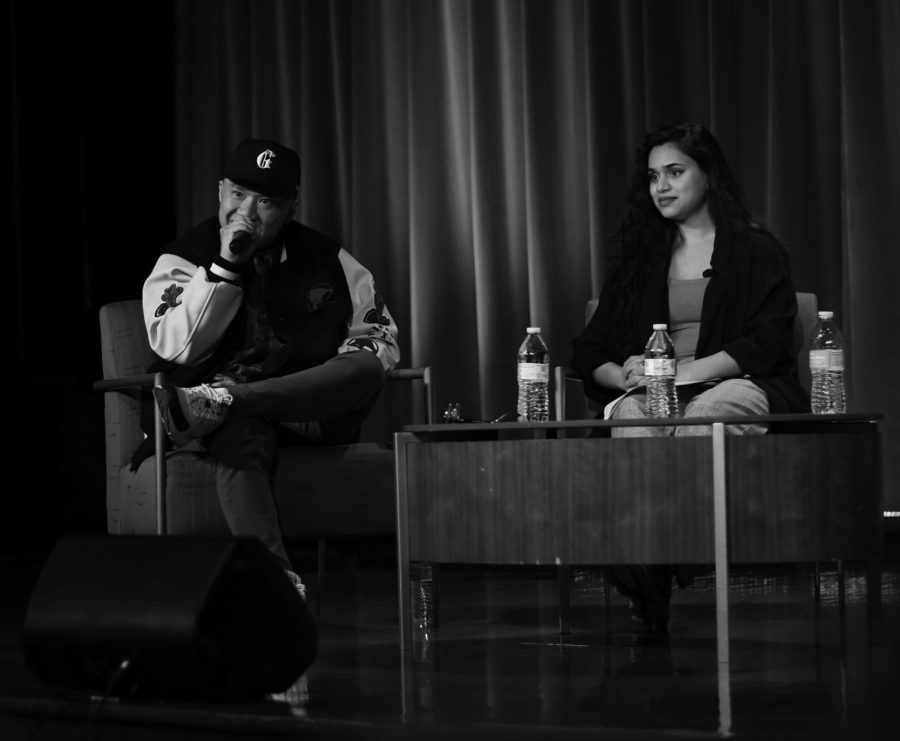 Editor’s Note: This article first appeared in the April 12, 2022 flipbook.

Over a hundred students poured into the William C. Powers Auditorium, eager to hear from one of the first few Asian faces they saw on their YouTube screens growing up.

“Our purpose is to promote and celebrate Asian American culture in UT’s student body through free events,” said Annie Wong, biochemistry freshman and event coordinator. “This year’s theme is ‘Listen Up,’and it is centered around how the headliners built a platform and used their voices to pursue their passions.”

Chantarangsu is an actor, comedian, and rapper known for his Youtube channel of 15 years where he interacts with four million subscribers. A member of MTV’s hip hop improv comedy show “Wild ‘N Out,” Cantarangsu also has his own food show “Send Foodz” and podcast “No Chaser.”  At InspirAsian, he discussed topics including his background in entertainment, family life, pandemic life, MTV and changing his stage name.

Chantarangsu mentioned that he changed his previous stage name during the pandemic. Based on his role model in the 90s sitcom, the Fresh Prince of Bel-Air, his original stage name was shorter and catchier than his Thai last name.

“There were a lot of people who were like ‘why is he calling himself ghetto or what is he trying to represent?’” said Chantarangsu. “I was like, ‘Okay, well, let me let me not be afraid of just using my long Thai last name as my stage name.’”

During the event, Chantarangsu spoke about his frustration with the exclusivity in the entertainment industry and how he originally joined YouTube to dispel stereotypes and inspire Asian youth.

“Back then, I felt like there was this untapped market for young Asian kids who had never seen people that look like them singing, rapping or being funny. That helped launch my career,” Chantarangsu said. “I was always trying to show these young kids, and young Asian kids specifically, that they didn’t need to be ashamed of where they came from, who they were (or)  their culture.”

Longtime fan of Chantarangsu, medical laboratory science junior Ethan Jantaworn said he deeply valued having a Southeast Asian role model like Chantarangsu to look up to as a kid.

“He gave a lot of his perspective on being not only Asian American, but Thai American — just like I am,” Jantaworn said. “At that time, I was really into rap, so seeing him on Wild N’ Out, someone who was Asian, was really inspirational.”

The Asian American Culture committee is one of ten student-led and University-funded committees, and aims to promote Asian American culture on campus. Wong said they have wanted to feature Chantarangsu for a while.

“He’s a great example of Asian American success and how building your platform and using your voice to pursue your passions is something that Asian American students should aspire to do,” Wong said.

“It really is an inspirational moment for students, and it’s an opportunity for them to interact with a role model that they’ve looked up to for a long time.”