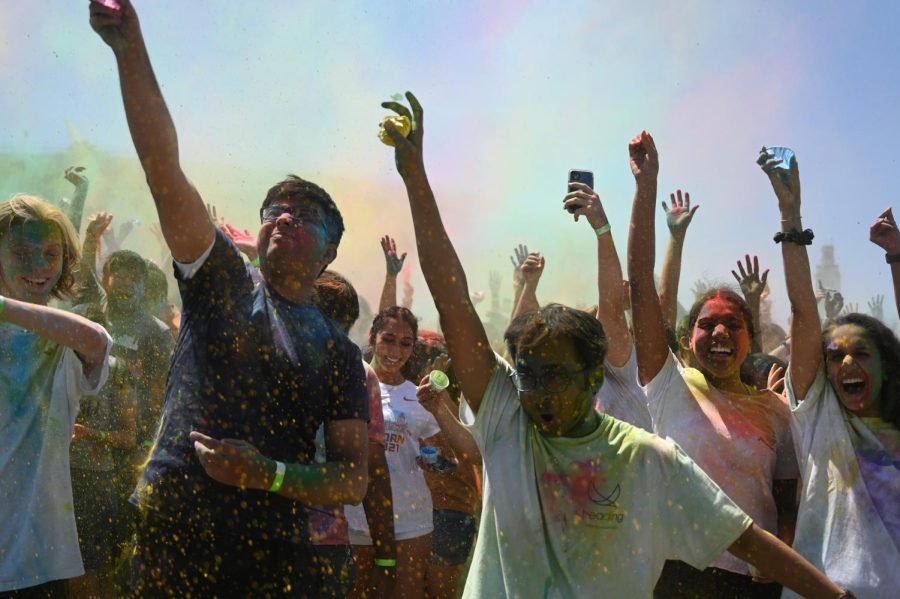 As the countdown ended, colors shot from thousands of hands into the air. Clouds of red, blue, yellow, green and pink powder, or “rang,” hung above the crowd and then slowly settled. Visible afterward was a Jackson Pollock-esque masterpiece — a sea of people in now color-bearing once white shirts.

After three years of not having an in-person Holi celebration due to the COVID-19 pandemic, the Longhorn Hindu Students Association worked for six months to bring the event back to life. They had 4,500 attendees come out to the Lyndon B. Johnson School of Public Affairs lawn on April 9 to celebrate the Hindu festival of colors that represents the victory of good over evil and the coming of spring, said aerospace engineering junior Nidhi Damu, a co-chair in charge of putting on the event.

Gaddam and Damu said the event proved to be more difficult to put on this year due to conflicts with scheduling, funding and almost nobody in HSA’s current core body knowing what the event looked like in person.

“We only have two seniors in our core body, so there’s only two people who know (what) in-person Holi looks like, which is a really big problem when you’re planning an event of this size,” Gaddam said.

Even with setbacks, Gaddam and Damu said they were happy with how the event turned out. Business freshman Nishi Datla, who attended the event with her friends, said it was one of her favorite experiences at UT.

“As soon as I got there, we all took our colors, and on the count of five, we just threw it up in the air,” Datla said. “That was really special to me, when I saw all the colors in the air, and everyone cheering and dancing to the music. That was honestly way better than any party I could have gone to.”

Datla said that seeing all the different people take part in the celebration made her feel seen and like her culture was being celebrated and uplifted.

“Holi is definitely one of my favorite Hindu festivals, and at this Holi, everyone was so inviting to (throw) colors at each other. No one was weirded out by it,” Datla said. “I just felt accepted. It’s nice that everyone’s happy and ended up with color on their face.”

Public health freshman Samik Gupta said he enjoyed being able to see everyone around him merge their American and Indian identities.

“We were all dancing to Bollywood music (and then switching to) dancing to American music,” Gupta said. “It felt as if we were all a community, in the sense that we all were all born and brought up here, but are all Indians, for the most part. There were so many people of different races there, and it felt as if they were also appreciating our culture. I really enjoyed that.”