Texas upset by Air Force in 14-2 beat down 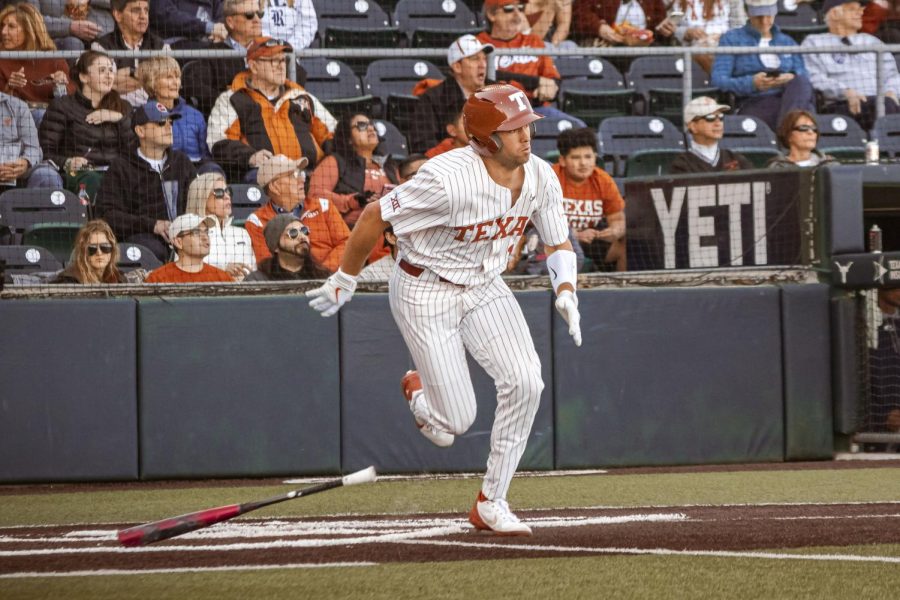 In No. 10 Texas’ 14-2 loss to Air Force at UFCU Disch-Falk Field, redshirt freshman Lebarron Johnson Jr. was one of the few bright spots for the Longhorns.

After the pitching duo of redshirt sophomore Justin Eckhardt and freshman Luke Harrison allowed a combined three walks and two home runs for eight scores in two innings, Johnson Jr. was called from the bullpen for the ninth time this season.

A Jacksonville, Florida, product, Johnson did not see the mound in his first year at Texas, and has only pitched 8.2 innings this season.

As a high school recruit, Johnson was the No. 160 national prospect overall due to his high velocity fastball and efficiency on the mound, dishing out 74 strikeouts in 41 innings pitched his junior year. His potential was put on full display during Texas’ fall ball before the season, hitting 96 mph at times.

Head coach David Pierce noted that Johnson had his stuff tonight, but it will be up to him to start building endurance for increased play time.

“He finally got command of his fastball, and when he did that, he was able to pitch to both sides of the plate,” Pierce said.

“There’s inconsistency with all of (the bullpen),” Pierce said. “If you walk eight guys, you’re going to get beat.”

Texas’ cold bats did not do any favors for the bullpen either. With only four hits on the night for the Longhorns, the offense could get little going.

To try and answer Air Force’s two runs scored in the first, redshirt junior Ivan Melendez shot a missile to center field for a single, while redshirt senior Murphy Stehly’s hit resulted in an extra base for Melendez. However, the Longhorns stranded the two runners on first and third base, killing any momentum the three and four-hole hitters kindled. Similarly, Melendez launched a home run in the third inning while Stehly reached first base, but the batting lineup left the right fielder stranded for the second time on the night.

Melendez’s 420-foot blast off the batter’s eye in center field is his 17th of the season, positioning him within the top three home-run earners in NCAA D1 baseball.

“It’s nothing that any of us like,” Pierce said. “But at the end of the day, we can tuck our heads and feel sorry for ourselves, or we can go out and keep working to try to get better.”