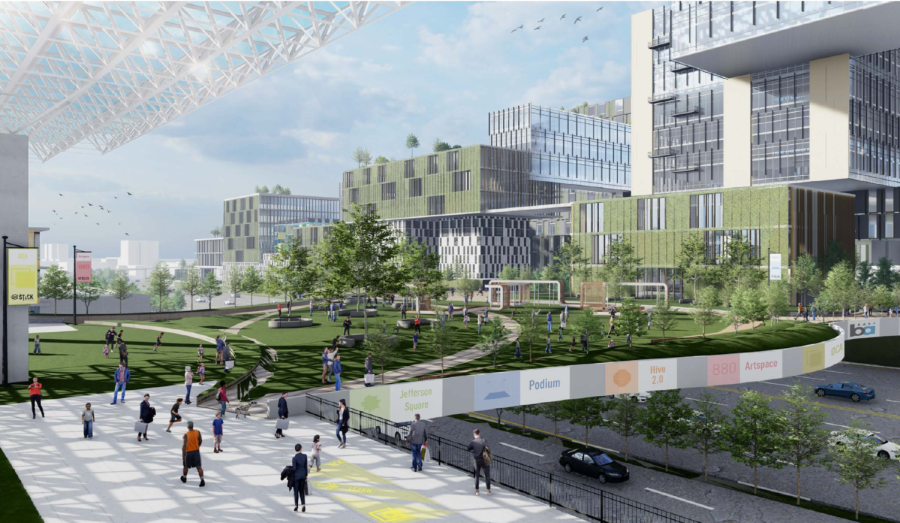 A team of UT graduate students from the McCombs School of Business and the School of Architecture won the 20th Annual Urban Land Institute/Gerald D. Hines Student Competition on April 7, earning UT its second win since 2017.

The ULI Hines Student Competition offers graduate students the opportunity to work in multidisciplinary teams to create landscape renovation proposals that encourage responsible land use. This year’s competition focused on creating a redevelopment plan for a four-block site in downtown Oakland, California.

“No one can work alone in this field,” Thakrar said. “It is really important to have different people from different academic and professional backgrounds to make a beautiful project.”

The team’s winning proposal, called “The Stack,” centers on three major pillars: health, culture and connection. These were identified to be the most important aspects to address in the Oakland community, said Sophia Aitken, a community and regional planning master’s student.

“Oakland is an amazing place. It is so special and richly diverse,” Aitken said. “This is something we really wanted to lean into. So it’s really like an arts and culture hub in the Bay Area.”

The main issue the team had to address was the presence of multiple interstate highways that split the area and cause high pollution around it. Interstate Highway 880 is the only highway in Oakland that allows trucks to drive through, making the area more polluted, Aitken said.

Cities like Oakland lack public transportation and are often prone to heavy traffic, which can lead to a lower quality of living, said Margaret Gallagher, a landscape architecture master’s student.

“The scourge of the American freeway is a very ubiquitous problem throughout the United States,” Gallagher said. “(The site) parallels a lot of the conversations being had in Austin right now.”

After looking at the experience in Austin with the Interstate Highway 35, the team designed “The Stack” to discourage people from spending too much time under the freeway, using the space for storage and connecting transportation stations instead, Gallagher said.

The students worked with Rebecca Leonard, CEO of Lionheart Places, who advised the team to think about the issues presented by the highway differently due to her experience working on the I-35 Cap and Stitch program. Aitken said she encouraged them to make their plan one that moves people away from the highway.