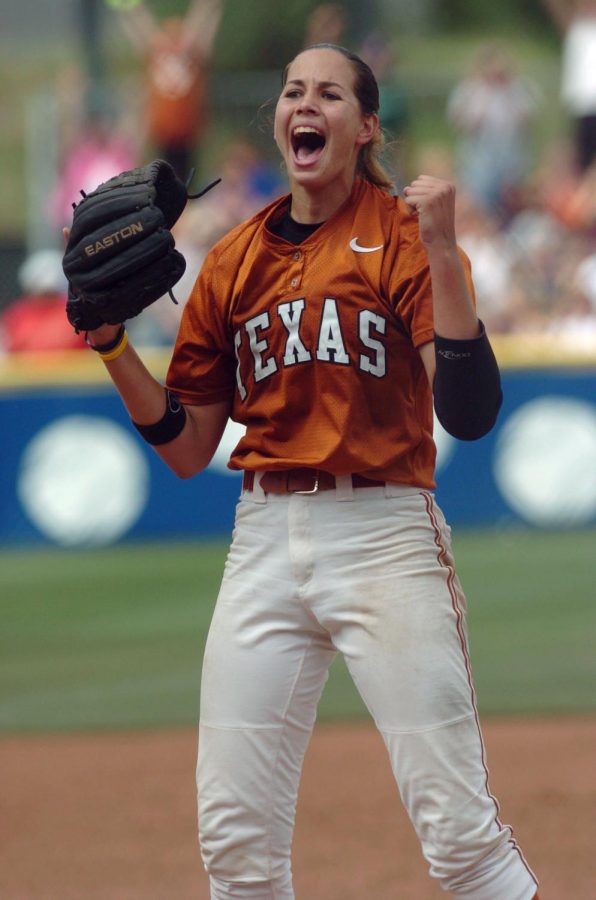 A Texas softball player will never wear the number eight again. Longhorn legend Cat Osterman earned claim to her collegiate number Saturday and her number is now eternally etched inside the Red and Charline McCombs Field.

Surrounded by family, friends and current Longhorn softball players, Osterman celebrated her 39th birthday with a pregame ceremony retiring her jersey prior to the team taking on No. 1 Oklahoma.

Hailing from Houston, Osterman played at Texas from 2002-2003, and 2005-2006. She holds Texas records in victories, ERA, shutouts and no-hitters, and is the only player to be honored with USA Softball’s National Player of the Year three times.

Throwing out the ceremonial opening pitch, Osterman’s career was honored with the largest crowd ever for a Texas softball game in attendance. She becomes the third Texas female student-athlete and first ever Texas softball player to have her jersey retired.

“When you think of Texas softball, Cat Osterman is the first name you think of,” head softball coach Mike White said following the game against Oklahoma. “She’s synonymous with it.”

Osterman reached the 1,000 career strikeouts mark in just her sophomore year at Texas.

Over her career, she led the Longhorns to three women’s College World Series in 2003, 2005 and 2006. Additionally, Osterman holds the NCAA record for career strikeout ratio per seven innings and continues to be the only player in NCAA history to lead the nation in ERA three times.

“She put Texas softball on the map,” senior Mary Iakopo said in a tribute video from Texas softball. “Her work ethic is like none other, and I think what we’re trying to do is exactly what she did in her era: make it back to the world series.”

She’s earned countless awards, such as Honda Softball Player of the Year in 2005-06, Best Female Collegiate Athlete at the 2006 ESPYs and Sportswomen of the Year for a Team Sport in 2005-06. A three-time Olympian, Osterman helped USA softball earn a gold medal in 2004. She also has two silver medals from 2008 and 2020.

“She has been an ambassador for our sport,” White said. “She is a great person who is doing a lot for our program and Longhorn nation.”

After coaching at Texas State as an associate head coach for multiple seasons, Osterman is now focused on working with children through RBI Austin, a program that looks to expand inner-city youth athletically, academically and spiritually with the goal of transforming their communities.

“I look up to her in everything that she does,” senior Janae Jefferson said in the tribute video. “When I think of her, she’s definitely a competitor and someone I will continue to look up to.”

Following the ceremony for Osterman, the Longhorns handed No. 1 Oklahoma its first loss, breaking a 38-game win streak for the Sooners.

The upset was realized when the final pitch from senior Hailey Dolcini was popped up and caught by freshman Katie Cimusz in foul territory to end the game. Dolcini allowed zero runs in six innings pitched.

In addition to RBI Austin, Osterman has headlined softball rosters for Athletes Unlimited, a network creating professional leagues across sports. She’s been with the network since 2020.

“Everyone sees that hard work pays off. It’s been hard work every day throughout my entire career,” Osterman said. “It’s a career I would have never imagined so I’m really thankful for the opportunities and obviously love Texas.”