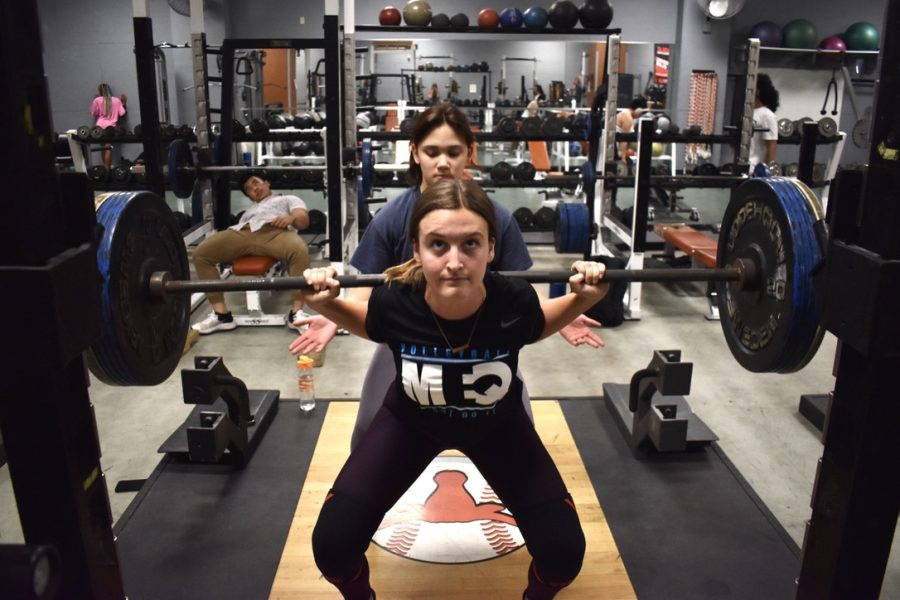 Running her fingers over the grooves of the barbell, Bella Vargas gripped the steep bar and murmured her powerlifting prayer. With a deep breath, she lifted the weight twice her size and waited for the referee’s signal. In the following seconds, Vargas would go on to win gold in her weight class.

The Longhorn Powerlifting club took home numerous awards at the USA Powerlifting Collegiate Nationals 2022 in Lombard, Illinois, which took place from March 27-30. As a team, they placed third in both the Men’s Raw category, where competitors lift with limited accessory equipment,  and the Women’s Equipped, where competitors use additional protective equipment. Individually, the club’s co-presidents — Vargas and electrical engineering junior Ken Nguyen — won first in their respective weight class and the title Best Lifter Overall, an award given to only four athletes.

“It was awesome to see both co-presidents — out of (1,000) athletes — be the ones who got the award,” Vargas, a communications and leadership senior, said. “It was an honor for both the co-presidents to be up there.”

After her gold medal performance in the national competition, Vargas said she was invited to Las Vegas this summer for Prime Time, a national powerlifting tournament she plans to focus her training on. Beyond proving her strength, Vargas said powerlifting competitions are filled with support from each lifter.

“It takes so much in the gym to prep mentally and physically, to lift these huge weights and to have such an amazing support system from each team; I’m in awe,” Vargas said. “This is the community aspect I really love. You just see all these teams screaming and cheering for each other.”

Julie Nguyen, a business senior and Longhorn Powerlifting officer, said she was proud of her participation and ability to gain points for her team. She said she viewed the tournament as a self-accomplishment instead of a way to gain awards.

“I knew I wasn’t going to place that high, but that didn’t affect me because I deserved my spot on this team,” Nguyen said. “I qualified; I worked really hard for that (goal).”

“This was by far the biggest competition I’ve ever competed at, so it was really cool being able to meet people from all over the country doing this thing that I like to do as well,” Morales said.

“After I finished competing, I would go and scream my lungs out for whoever was competing,” Morales said. “The whole team’s voices were out as soon as we got back on the plane.”

Like Vargas and Nguyen, Morales said he created lasting bonds with his powerlifting peers, counting on them to be his spotter beyond the gym.

“We’re all unified through powerlifting,” Morales said. “It’s kind of like a family. They’re there regardless, no matter what else is going on. We can all come to the gym and leave everything else at the door.”