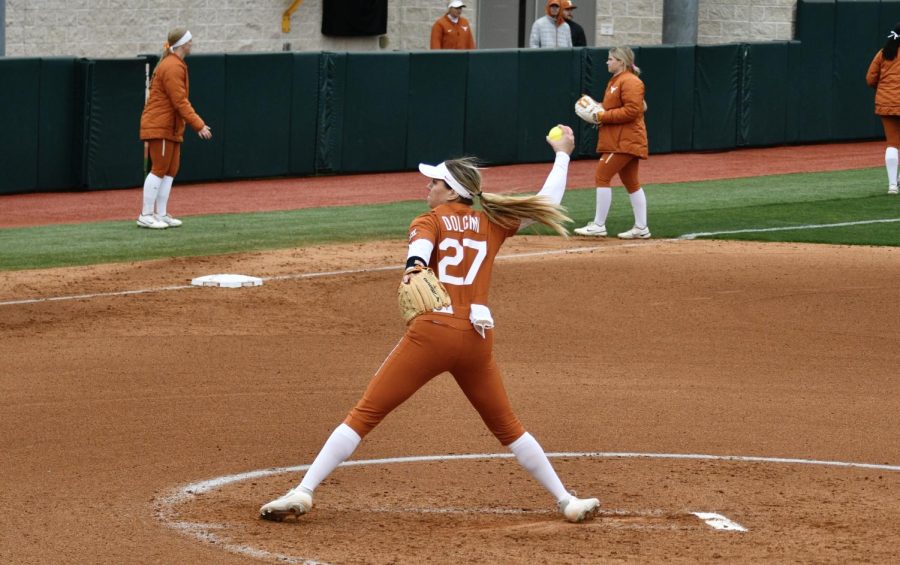 The cool, calm and collected demeanor that led Dolcini to the seven-inning, two-run performance also earned her an ERA of 2.37 this season. Dolcini is just as impressive off the field with a 4.0 GPA, earning her place as one of 10 finalists for the 2022 Senior CLASS Award.

The Senior CLASS Award is given in every major Division I sport to seniors and graduate students for outstanding achievement inside and outside of the sport. Its four areas of excellence are community, classroom, character and competition. Prominent athletes like Duke’s JJ Redick and Mississippi State’s Dak Prescott are both former winners of the award.

Dolcini has worked in the community since her junior year at Fortuna High School in California, where she started an initiative called “K’s for Kids Cancer.” The organization gathered set pledges from the community and pledges of $70 per strikeout that she accrued in her junior and senior season. Every dollar was donated to Cookies for Kids’ Cancer, a nonprofit in New Jersey that donates all of their proceedings to research.

“There (were) a few kids that had been diagnosed with cancer that I knew, and one specifically that had played softball, and ultimately it stopped her from playing,” Dolcini said. “So, realizing the success I had in the sport and how awesome our community is, I wanted to do more with that.”

Averaging 200-300 strikeouts per season in high school, by the end of her time at Fortuna, she raised approximately $10,000 dollars toward research.

In the classroom, Dolcini has a 4.0 GPA at the University of Texas as a member of the strategic communication program. Dolcini already earned her bachelor’s degree in public health from Fresno State University, showing excellence in the classroom is a priority for the star pitcher.

Dolcini used to give softball lessons to young girls directly back in Fresno, her second collegiate stop, so impacting the future of the game is of the utmost importance to Dolcini. She also tries to be a mentor to the other pitchers on the roster at Texas, as Dolcini is by far the most senior pitcher in the rotation.

“Sophia and Estelle will definitely pick my brain … whether it’s different pitches or mentality,” Dolcini said. “I try to speak with them after maybe a tough game or something, because it’s tough to learn at this level that you’re not defined by your one performance.”

Dolcini has also found enjoyment off the field by engaging with fans, especially those who remind her of her younger self. Knowing she was once in their shoes, Dolcini welcomes her role as a role model for the next generation.

“I think mainly (I put) myself in the position of (being available) whenever I see a younger girl, whether it’s for autographs, or (someone) who just wants to ask a question about softball, knowing I was once in that position,” Dolcini said. “They don’t care about the wins and losses, they don’t care what your ERA is, they think you are Superwoman.”