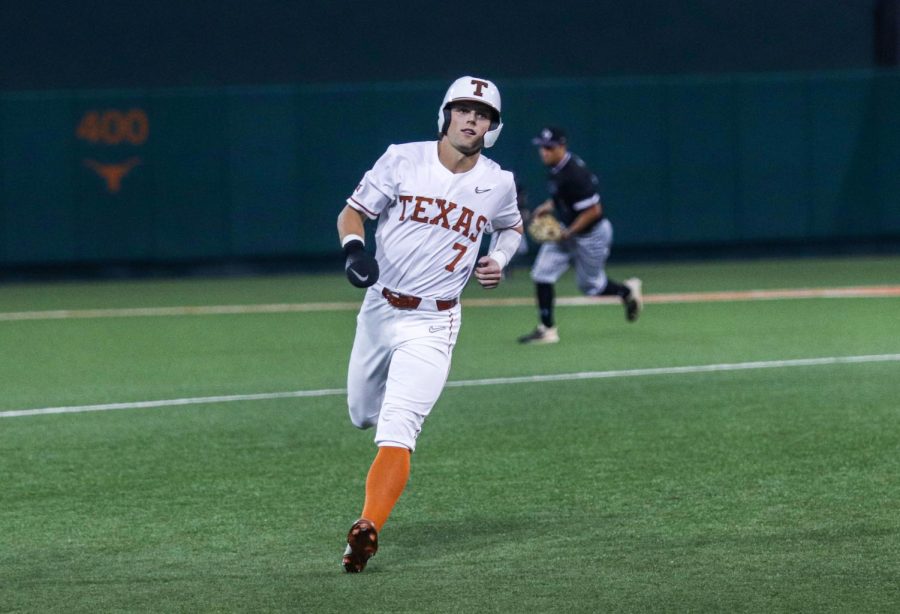 No. 10 Texas baseball went bear hunting in front of a sold-out crowd at UFCU Disch-Falk Field on Friday in its 20-1 rout of Baylor.

Every Longhorn batter in the starting lineup recorded at least one hit and one run on the night, while five players hit home runs, overwhelming the Baylor pitching staff and recording the most runs scored in a Big 12 matchup this season.

Following a 1-2-3 inning from Baylor redshirt sophomore Will Rigney, the right-handed pitcher was replaced on the mound by graduate transfer pitcher Jake Jackson after walking redshirt senior infielder Murphy Stehly and throwing one short of the plate.

With Rigney out of the picture for the Bears, the Longhorns went to work. Graduate transfer infielder Skyler Messinger singled out to left field, and sophomore outfielder Dylan Campbell drew a walk, loading the bases for redshirt sophomore shortstop Trey Faltine.

Faltine, who scored the two-run-walk-off homer in last Wednesday’s nail-biter versus Air Force, took just three swings to launch a double alongside the left-field foul line, clearing the bases and adding the first three to Texas’ score.

Following Tuesday night’s 14-2 loss against Air Force, Faltine and four other players sat inside the dugout after the game, distraught over the blowout loss on their home turf.

“We were all pretty pissed off and upset about Tuesday’s game,” Faltine said in a media availability Thursday. “We kind of stayed out there and talked about how to get better.”

Faltine continued to make good on his promise to be better. Following redshirt sophomore catcher Silas Ardoin’s three-run homer, the shortstop launched a two-RBI single to right-center field, building on Texas’ offensive momentum and widening the lead to 8-1.

With the outrageous offensive production for Texas, head coach David Pierce used the fifth inning’s 16-1 lead to give bench players including sophomore catcher Kimble Schuessler some time on the field. In the bottom of the sixth, the Texas A&M transfer launched his first home run and fourth hit of the year 442 feet deep into left field.

“Schuessler puts so much work in behind the scenes and playing when he has an opportunity and doing it with a great attitude,” Pierce said. “For him to go in there and crush a baseball, … the team was just ecstatic for him.”

“It’s big for Zane (Morehouse) tonight,” Pierce said. “We’ve been searching for some things in the bullpen, and he wasn’t just in there for pop-up — we are trying to find the right guy.”

Pierce notes that getting players like Morehouse and Schuessler on the field in conference games builds team unity and kindles an appreciation for their hard work.

“It’s not only just getting them in and having that experience but them being accepted by their teammates,” Pierce said.  “Having success and (them feeling) a part of the success is a big win.”