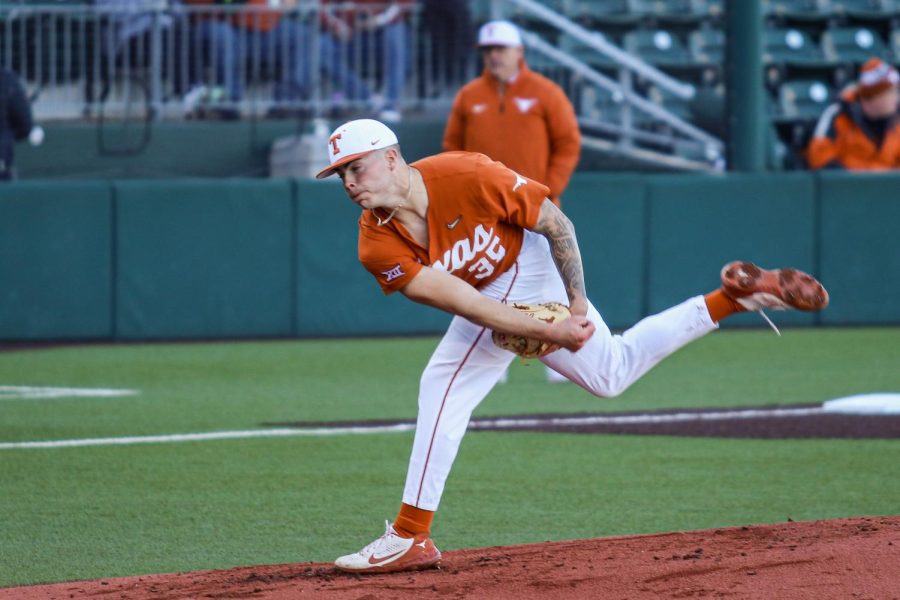 Redshirt senior Tristian Stevens throws a pitch during the Alumni game on February 5.

Prior to Saturday’s matchup against Baylor, No. 10 Texas baseball had not won a game that Stevens started in 35 days. Despite Stevens posting some solid performances, the redshirt senior had yet to earn a conference win this season. An 11–3 pitcher last season, the righty held just a 4–4 record prior to Saturday.

“Going through (rough stretches) is never easy,” Stevens said. “You just have to go back to your routine, trust yourself and realize (that) at the end of the day, it is just a game. So as much as I want to enjoy building off of a better outing, it’s back to work tomorrow.”

In the afternoon, Stevens gave up four runs off of two home runs and eight total hits. Head coach David Pierce said he was pleased with Stevens’ performance given the conditions but knows Stevens can still be sharper.

“He’s still just a little frustrated with not making pitches like he knows how,” Pierce said. “He’s still trying to get that sharpness to install, so he’s working through it. That’s why it struck me, he knows he needs to be better. For a guy to feel like that after giving up four runs in (windy conditions) is still pretty solid.”

After every home run, the Longhorn batter went into the team’s dugout and put on a Texas football helmet. The helmet was brought to the team on assistant coach Sean Allen’s return Friday, as a joke in reference to Allen’s injury suffered by a foul ball hit in Tuesday’s game against Air Force.

A team favorite, Silas Ardoin said he expects the helmet to stay for the remainder of the season.

“Our goal is to have fun in the dugout and have fun out on the field,” Ardoin said.

With the win, Texas improved to a 29–13 overall record and a 8–6 conference record. Coming off of a series loss to Kansas State and a midweek series split with Air Force, Ardoin said the past two games helped Texas start to regain its confidence.

“We’re definitely going to take the field with confidence every time we take the field,” Ardoin said. “We’re going to believe that we can beat anybody in the country.”

Texas will look for its first conference sweep of the season Sunday afternoon when it faces Baylor for the series finale. The Longhorns will go against Baylor ace Tyler Thomas, who is averaging a 1.97 ERA.