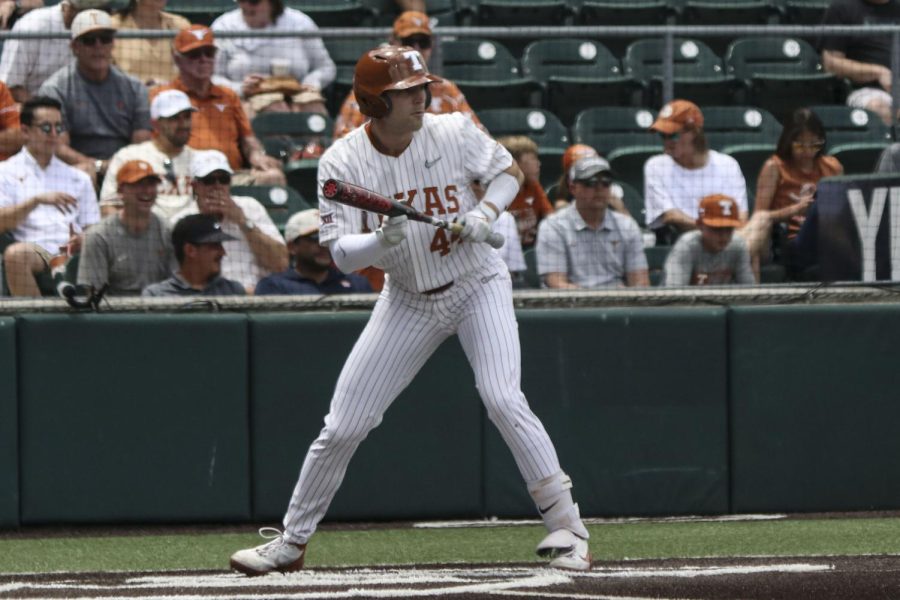 It had been 777 days since redshirt senior outfielder Austin Todd homered.

In Texas’ Sunday 13-4 win against Baylor for the series sweep, Todd played one of his best games at UFCU Disch-Falk Field, hitting 3-for-4 with two singles, one walk and the home run.

With two outs, Todd blasted the 399-foot solo homer out to left field, improving Texas’ lead to 4-1 heading into the third inning. The home run is Todd’s first since March 8, 2020, against Cal State Fullerton — Texas’ second-to-last game before the COVID-19 pandemic ended the season.

“I’m definitely happy for him because we’re always on him, like, ‘When are you gonna hit a home run? You should switch your bat,’” redshirt junior infielder Ivan Melendez said. “He works hard, so we’re proud of him.”

Last year, Todd played and started in six games before suffering a shoulder injury against Sam Houston State, granting the fifth-year outfielder one more season with the Longhorns.

In 2022, Todd made his sixth-consecutive opening day start and played in 11 games before reinjuring his shoulder, taking him out of the ballpark for about a month until he returned as the designated hitter.

Since returning to the plate in early April, Todd has scored 16 runs, kindling offensive firepower to an already explosive Longhorn offense.

“It’s just been so difficult for him because as soon as he gets healthy, he (has) that injury,” head coach David Pierce said in a media availability before Sunday’s game. “Hopefully it’s behind him, and he can finish strong.”

Todd had another crucial play in the fourth inning. With two outs, the outfielder hit a single to center field past a couple of Baylor Bears, advancing redshirt sophomore outfielder Douglas Hodo III to third base. With runners on the corners, Melendez meticulously placed a batted ball in center-left field for a two-run single, widening Texas’ lead to 7-2.

Melendez also added his 20th home run of the season in the first inning, where he launched a ball 423 feet into left field, making a passing truck slam on its brakes and erupting the crowd into cheers.

His second home run of the afternoon was in the sixth inning, where the ball traveled 401 feet at 113 mph off the bat.

After the weekend, Melendez has 61 hits and 61 RBIs in 2022, with about a third of his hits counted as home runs.

“I get a bunch of @s on Twitter, Instagram, (and) everybody sends me all these crazy stats of Longhorns’ history with Kyle Russell and stuff,” Melendez said. “I just try not to pay mind to it. Our main focus is to win, and that’s what I try to do every day.”

Over the series, Texas outscored Baylor 46-9 in a massive offensive influx, recording double-digit runs in every game of the series and accumulating 14 home runs.

“I think when they all get going at the same time, it’s really tough to pitch to them,” Pierce said.

To close out the game, sophomore pitcher Aaron Nixon dished out 40 pitches in his 2.1 shutout innings.

Texas baseball will travel to Edinburg, Texas, to take on UT-Rio Grande Valley on Tuesday.