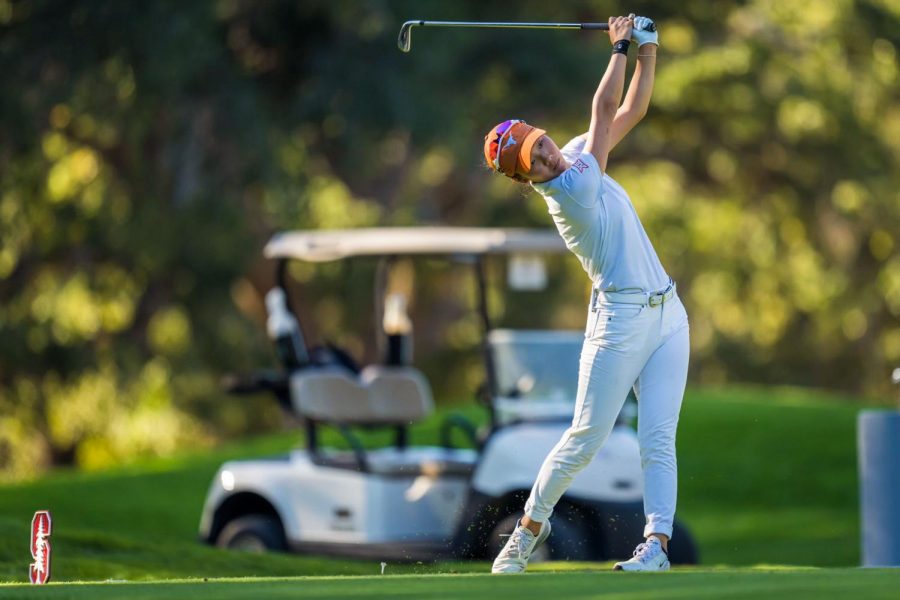 No. 14 Texas traveled to Hockley, Texas, to compete at the tournament held at The Clubs at Houston Oaks. The course is 6,224 yards long with a par of 71. The Texas women’s team brought home its seventh Big 12 Championship title with the win.

The Longhorns went into the weekend as the second highest ranked team in the tournament, behind No. 6 Oklahoma State and ahead of No. 16 Baylor.

Senior Sara Kouskova led the Longhorns to second place after one day of play with a score of 71 to tie for fifth individually. Kouskova was followed by Park, who finished the day in 10th place with a score of 72.

As a team, the Longhorns finished day one with a score of 291, tied for second place with Iowa State and three strokes behind Baylor.

On day two of the tournament, four Longhorns moved into the top 10 of the standings. Park continued her strong play, scoring a 70 to move into second place. Kouskova scored a 74 to move her into a tie for third place with fellow Longhorn sophomore Bentley Cotton, who scored a 71. Graduate student Brigitte Thibault recorded a score of 74 to tie for 10th place.

The strong play from the Longhorns on day two pushed Texas into first place with a total team score of 287 on the day.

The Longhorns’ round two play featured 12 total birdies with Park recording five of them. While Park recorded a 75 on day three, she held on and finished tied for third with Caitlyn Macnab of TCU and Oklahoma State’s Han-Hsuan Yu with final scores of 217.

Kouskova recorded a 73 in the final round, bringing her final score to 218 and resulting in a sixth place finish. Cotton recorded a 77 to finish tied for 11th place with TCU’s Trinity King, both with total scores of 222.

The Longhorns held on for the win, finishing with a total score of 876, beating Baylor and Oklahoma State by three strokes.

Park recorded her best individual finish of her career so far, and the freshman from Farmers Branch, Texas, is no stranger to winning under pressure in these types of tournaments. Park was a three-time Texas 4A individual state champion while competing at Ranchview High School.

Texas’ Big 12 Championship win is the first in three years. Last year, the team placed fifth, and, in 2020, the tournament was canceled due to the pandemic. Thus, Texas regained its title after a three-year win streak that ended in 2020 and will look for more success at the NCAA Regional Championship beginning May 9.