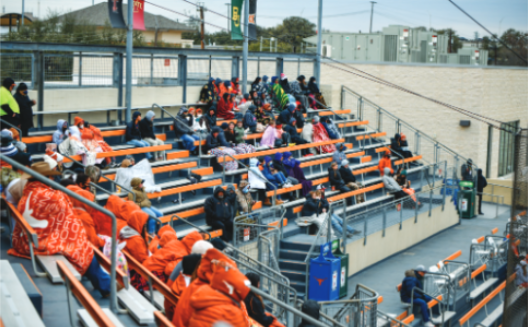 Editor’s Note: This article first appeared in the April 22, 2022 flipbook.

Texas softball took the Red and Charline McCombs Field by storm against Oklahoma last weekend, rounding up the largest crowd in program history.

Last Saturday, 1,698 fans packed into the stands for the final game of the series, surpassing the previous single-game record of 1,570 that was set against Oklahoma State nearly 16 years ago. Friday’s game drew in at a close second of 1,687 and Thursday in third with 1,498. Overall, the series saw the largest total weekend attendance for the program, coming in at 4,883 attendees.

Texas has ranked within the top 32 teams in average home attendance every season since McCombs Field opened in 1998. Texas’ current high for average attendance across a season happened in 2019. That year, softball averaged 959 fans and sold out the last seven games of the season.

History has repeated itself this season. For the first time since that 2019 season, the team had three consecutive sellouts for the series against Oklahoma.

“We feel like we’re getting some momentum back that we had in 2019,” head coach Mike White said. “To start getting the stands full of support and putting some really good games on the board, it’s just great.”

To accommodate the attendance increase, McCombs Field recently added seating behind right field. The new section was originally supposed to be finished before the spring 2020 season but wasn’t installed because of the pandemic.

Some of Texas’ student athletes from other sports have made appearances at softball games this season. Texas football star Bijan Robinson and basketball forwards Brock Cunningham and Christian Bishop were seen on Twitter in the stands supporting their fellow student athletes.

Despite the success in numbers, White emphasizes that the most difficult part of raising fan attendance is actually enticing people to show up to the games for the first time.

“I think our big thing is getting people to come to the games, but once they come, they enjoy it, they love it, and we get them back,” White said. “Now, we’re just going to have to build some more stands.”

The team has implemented various themes and events into their game schedules to engage viewers of all ages and build a more intimate connection between the team and its supporters. Such activities have included asking fans to wear specific colored shirts, autograph signings, inviting younger fans to stand with the team during the national anthem and allowing fans to run the bases after the games.

“It’s all about the energy when you’re out there engaging with the fans,” White said. “What’s so great about softball is that we’re so close to the fans, so we try to take advantage of it.”

As the Longhorns head into the final stretch of the season, the team hopes to see another roaring crowd on May 8 for its last game at McCombs Field this spring season.