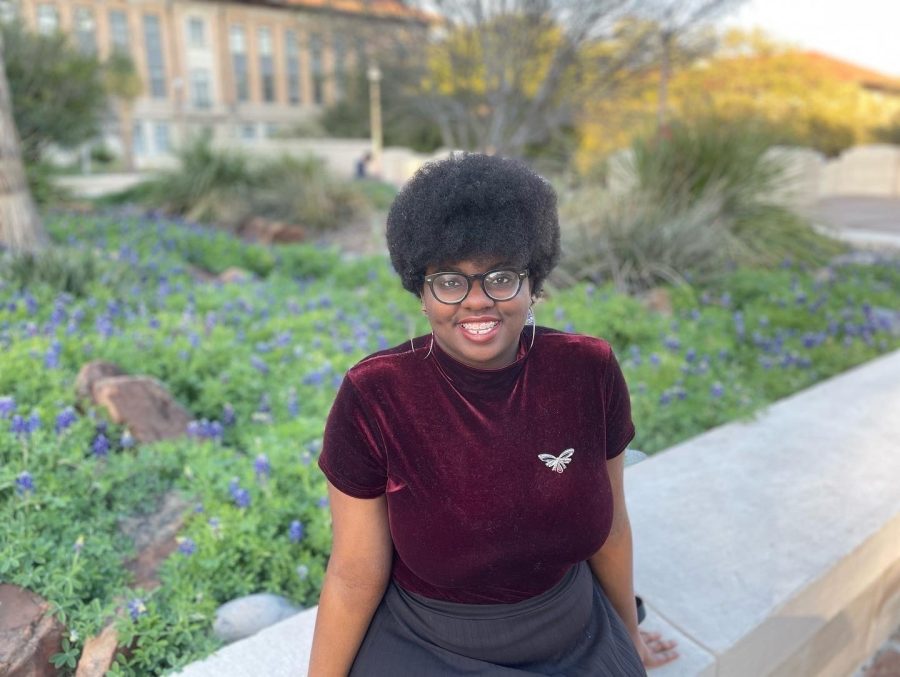 Ignoring her many doubts, Maddie Petaway recited lines of poetry and rehearsed her stances in preparation for the curtain call. When the lights dimmed, her shoes clicked against the ballroom floor, and she stepped toward the crowd.

The spotlight centered on her and she began.

“I wish I understood what it is like to be a black girl,” she said.

When English freshman Petaway took the stage at the Texas Revue 2022 Talent Show with the only poetry act, she dazzled with a poetic performance of two pieces, To Be a Black Girl and Gifted and Talented, which eventually won her the competition. Petaway said she viewed her achievement as a step forward for performance poetry, reminding the audience that the art exists and continues to matter.

“I had mega imposter syndrome,” Petaway said. “People kept talking about their acts, and I felt so out of place. I didn’t have any music (or) special lighting; (it was) just me and a microphone.”

Despite her doubts, Petaway said she continued through her performance, intending to revolutionize the way people think of poetry. Petaway practiced and modified her act, curating her on-stage demonstration to match her powerful words, such as “Position yourself in a warrior stance” and “increase my volume for dramatic effect / and even then I pose no real threat.”

“I want to shock the audience,” Petaway said. “They’re expecting to see (their idea of poetry). Let me show them that’s not the case.”

Petaway said her first poem of the night, To Be a Black Girl, which was published in the New York Times in 2020, handles colorism and the Black community. Her newer work, Gifted and Talented, chronicles the struggles of balancing burnout with the expectation of high performance.

“Black women are seen as strong and independent,” Petaway said. “Through my poetry, I’m showing that strong independence, and just because it doesn’t look like yours doesn’t make (me) any less of a Black woman.”

Petaway said her favorite line from To Be a Black Girl is “surrender is not the way of a woman of color” because it brings attention to and can unite fellow women of color in the audience.

“Maybe we’re not in the same boat, but (we’re) experiencing the same storm,” Petaway said. “We’re in this together; let’s fight this together.”

Public health sophomore Misha Bhakta said Petaway’s pieces spoke to her as she could relate to issues and experiences Petaway described in Gifted and Talented.

“I could relate to most of the experiences (Petaway) shared,” Bhakta said. “Hearing other POC women speaking about (their) POC experience was phenomenal.”

Psychology freshman Heaven Flores said that though Petaway performed for an entire audience, her delivery felt incredibly personal and relatable.

“It was really powerful to see someone who has also gone through the experiences that I have … (convey to the world that you’re more than someone who’s going to work and make money for an employer,” Flores said.

Petaway said her win will serve as a shining reminder that poetry can leave a lasting impact and deserves appreciation.

“I was shocked because I wasn’t expecting to win,” Petaway said, “People really pushed (me) to the side at times, so when I (won), my mouth dropped. Poetry won the night, and I’m so happy.”