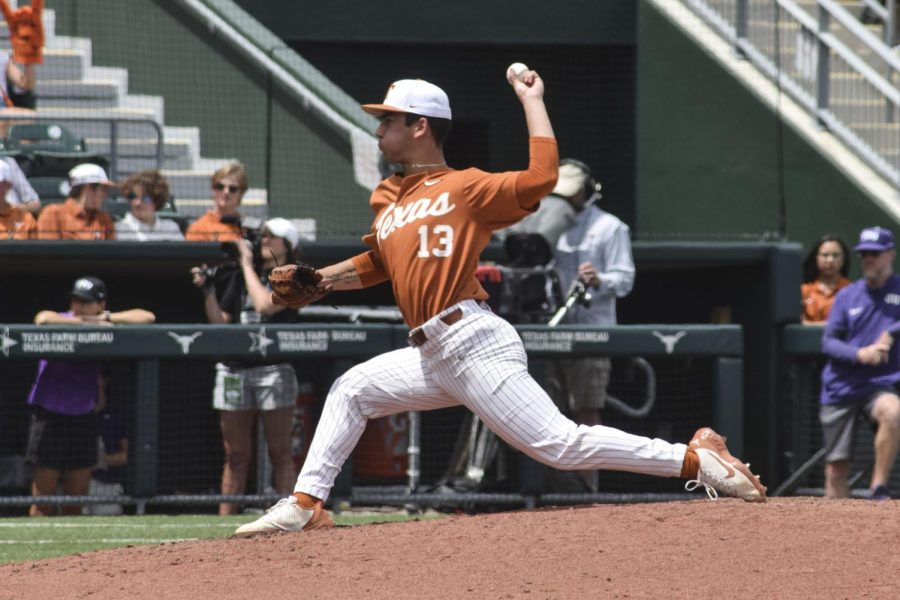 No. 10 Texas baseball shut out No. 8 Oklahoma State for six full innings.

But by the end of the seventh inning, the Cowboys scored 10 runs off a mere four hits, solidifying Oklahoma State’s 10-8 win for the series sweep.

Sophomore pitcher Lucas Gordon had his best outing since coming to the program in the 2021 season. In his six innings pitched, the southpaw dished out a career-high 11 strikeouts in 101 pitches.

All season, Gordon has been clutch for Texas. Despite beginning the season as a primary reliever in the bullpen, the Los Angeles product replaced sophomore pitcher Tanner Witt as the Sunday starter in early March.

Since starting on the mound, Gordon won two games against Kansas State and Texas Tech to avoid series sweeps for the Longhorns.

“(Gordon is) awesome. I can’t ask for more out of him,” redshirt sophomore catcher Silas Ardoin said. “He attacks the strike zone, and all of his pitches challenge their best hitters in big situations.”

After being retired in the top of the seventh, Gordon received a standing ovation from the 7,139 fans packed into UFCU Disch-Falk Field.

After such a commanding pitching performance, Texas baseball fans believed Gordon won another Sunday game for the Longhorns. However, a bullpen implosion awaited the ball club.

Gordon’s second walk of the game before stepping off the mound sparked a 44-minute half-inning dominated by free passes, as the Longhorn pitching staff accumulated seven before moving on to the home half of the inning.

Redshirt sophomore pitcher Zane Morehouse was the first to take the mound for Texas. In his 14 pitches, the right-hander loaded the bases off a walk before allowing the first Cowboy score of the game with another walk.

Oklahoma State scored a three-run double off Morehouse, bringing about another pitching change.

Redshirt junior pitcher Coy Cobb took his spot on the mound, walking two batters himself before the Cowboys’ designated hitter Griffin Doersching launched a ball into left field for a grand slam, giving Oklahoma State a one-run lead at 8-7.

With one out in the seventh, redshirt sophomore pitcher Jared Southard had his turn on the mound, walking another two batters to bring in the fifth Texas pitcher of the inning.

Freshman pitcher Luke Harrison allowed two scores off a single and an error from redshirt senior infielder Skyler Messinger, but recorded a strikeout and forced a groundout to end the 55-pitch inning.

“You give up seven free passes — you walk five and hit two,” Texas head coach David Pierce said. “That’s how teams get back in a ball game.”

Forty-seven games deep into the year, the season story has shifted from what Texas can do to what it can’t. Bullpen pitchers have accounted for nine of Texas’ 16 losses on the season.

“I’m very surprised (the bullpen) is struggling as much as it (is),” Pierce said. “Just all at once this snowball effect is really affecting this team. We can only push the starters so far. We’ve just got to get better.”

Despite the pitching staff shutting out the Cowboys for the remainder of the game, the Longhorn offense couldn’t rally back from the disastrous seventh inning. Redshirt sophomore shortstop Trey Faltine blasted a 363-foot solo homer, but no other Texas player rounded home for a score.

Texas baseball has a chance to break its three-game losing streak in Tuesday night’s matchup against Houston Baptist at home.