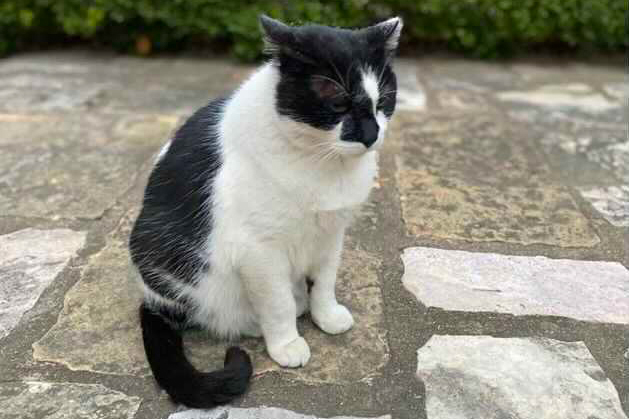 Domino, the celebrity campus feline and UT’s most “beloved mascot” who brought comfort and companionship to many in the University community, died Tuesday. He was 13 years old.

“There have been a bunch of Bevos and white squirrels,” wrote Patrick Parker, one of Domino’s caretakers, “But there is only one Domino.”

Domino was diagnosed with feline immunodeficiency virus and an upper respiratory disease in late 2021. After antibiotics failed to treat him, a vet discovered a cancerous growth in his throat, Parker said. Domino was moved from campus to a foster home, where he lived until health complications caused him to have trouble eating. A vet visited his home to help him die peacefully Tuesday.

Nearly 100 people came to a memorial service hosted by the Cats of West Campus group on Wednesday. During the service, the tower bells played songs such as “Amazing Grace” and “The Lion Sleeps Tonight.” Students, faculty members and employees wrote messages on one of Domino’s two houses and left treats and flowers for him during the service.

“I loved seeing students interacting with him,” said Renee Babcock, who used to care for Domino. “We loved this silly little cat with the grumpy face. He was a real rock star.”

Babcock, an academic advising coordinator, noticed a black-and-white cat claiming the West Mall as his own in 2009. Although initially timid, Domino grew into a spunky personality that earned him the love of the UT community. For 10 years, Domino greeted Babcock each morning.

After his arrival, the tuxedo cat’s popularity skyrocketed, partially due to a Reddit post that received nearly 80,000 upvotes in 2019. Following this, The Daily Texan made a video about him and, since then, he’s gotten his own social media pages, been a part of graduation photos and had multiple articles written about him. But more importantly, “The King of Campus,” as he was nicknamed, was a friend to many in the UT community.

“I feel like I’ve lost one of my own cats,” Babcock said. “I think there was something about his presence that we all counted on.”

University employees formed the Domino Council to feed and care for him during his early days on campus.

“We had this funny race to get to the FAC so he could be fed,” Parker said. “It was so funny that we saw him so far away and he would recognize me.”

A petition calling for a Domino memorial statue has gained over 4,200 signatures in the past two months, with a spike in support after his death.

Parker said the best way to celebrate Domino’s life is to advocate for stray cats on campus.

Graduate student Muneeb Aslam said when he came to the University as an undergraduate in 2014, Domino reminded him of his cat back home.

“Domino approached me, and it really made my day,” Aslam said. “(Domino) showed me love and affection, and it gave me a glimpse of what it felt like to be at home.”

Used to the bustling campus life, Domino got lonely during the early days of the pandemic. He followed Parker around after being fed one night in 2020.

“He just kept following us,” Parker said. “We’d go and he’d cry at us again. … That’s how I feel now. I just keep crying and crying and I’m not ready for him to leave us so soon.”