Meet Beta, a 15-month-old German Shepard in the driver’s seat of his patrol car. Beta and his handler, Officer Jeanne Hall (not pictured) are the newest members of the UTPD’s K-9 unit. The purpose of UTPD’s K-9 unit is twofold: sniffing out narcotics and detecting explosive devices in and around campus.

“When we went to go see (Beta), we threw a ball in the field and timed him to see how long it took him before he gave up on looking and came back to us,” Hall said. “He never stopped looking. So you want a dog that is going to continue to work to do his job.”

Beta, a 16-month-old German shepherd, joined UTPD’s K-9 unit in November, becoming the third dog to join the unit. Beta’s calm personality is much like hers, Hall said.

“They like to try and match personalities of the dogs to the handlers,” Hall said. “I’m a really laid back person, he’s a really laid back dog … He still gets a little bit anxious once in a while. But it’s pretty easy to reel him in and get him to calm down.”

Hall said she began getting acquainted with Beta before attending a training facility in Arkansas where they trained together for two weeks.

“I had him for a week just to start a bonding process because it takes a while to bond with these dogs,” Hall said. “He knew how to do everything because he was trained before I got him so (training) was mostly me learning how to work with him.”

Hall started working at UTPD about two and a half years ago and became a K-9 handler in November. Since she and Beta are both new to the unit, Hall said she is not ready to have Beta deployed yet because she wants him to get more oriented with his surroundings.

“Right now I’m working with him every day, four to six hours every day, training him because it is both new to me and new to him,” Hall said. “As far as actually deploying him right now, I could, but I’m not going to unless I am 100 percent ready.” 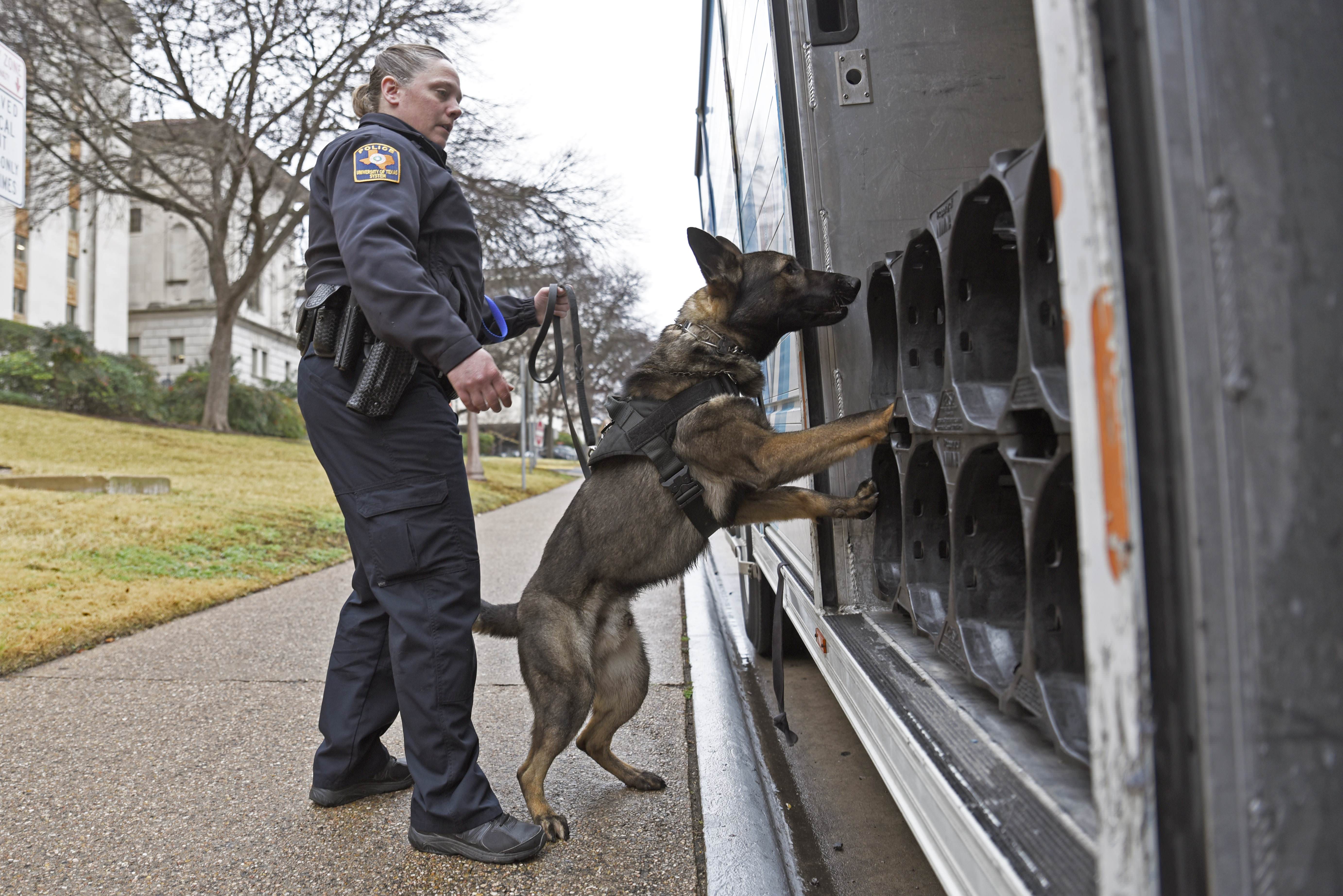 All of UTPD’s K-9 officers are dual purpose dogs, meaning they are trained for bomb detection and criminal apprehension. Before large events such as football games, graduations and VIP lectures, K-9 officers sweep venues for explosive devices or any other kind of threats.

Sergeant Eric Johanson, the handler for K-9 officer Jarno, a 4-year-old Belgian Malinois, said it is important to take such precautions on a large campus such as UT.

“We’re trying to keep the unit staffed with at least three dogs,” Johanson said. “As the campus grows and we get more people on campus and more visitors, there’s really a need for detection dogs.”

UTPD’s K-9 officers have been imported from overseas — Beta is from Slovakia. Johanson said a lot of these dogs have trained to be working dogs since they were puppies.

“When (the dogs) are born, people overseas breed the dogs with the intent of training them,” Johanson said. “Here we have the (American Kennel Club) stuff, where they try to breed the prettiest dog. (Overseas) they do the same thing but … (trainers) will go to dog clubs and they will raise these puppies and train them to perform tasks.”