UT elected nutrition senior Colton Becker as Student Body President for the upcoming year, following a delay in the announcement of the election results Thursday night due to unheard complaints filed with the Election Supervisory Board.

“It definitely hasn’t sunk in yet,” Becker said. “Given the amount of people running this year, we were totally shocked.” 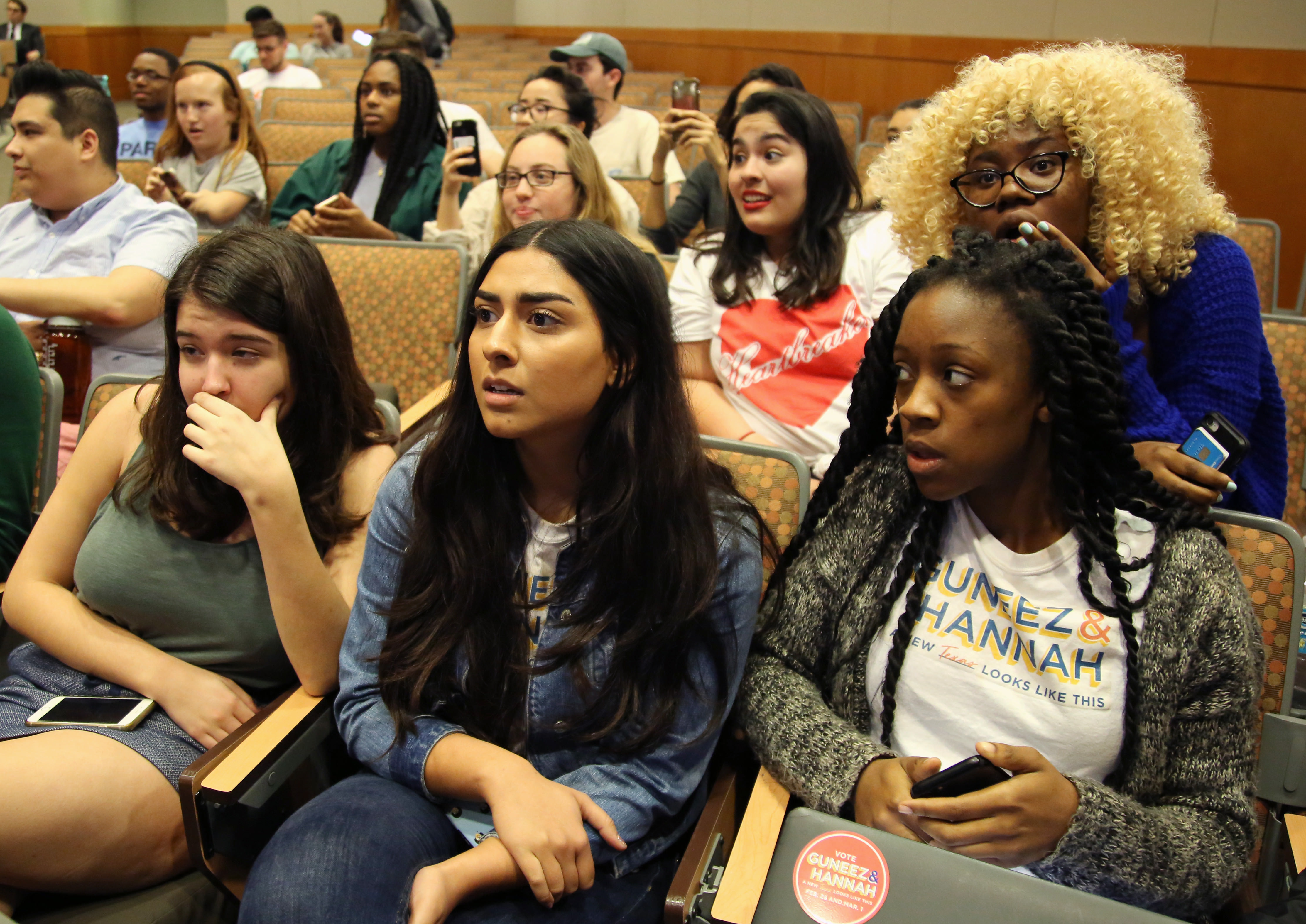 Rahman said she doesn’t have much experience with campaigns and that she thought the election would have gone into a run-off rather than ending today.

“I’m shocked but relieved because it was hard,” Mehraz said. “It was emotionally exhausting for everyone, so many unfair things happened on all sides, and I really felt like things were getting really toxic. I’m just happy it’s over.”

The rest of the elected student positions across campus, including SG assembly representatives, The Daily Texan editor-in-chief and more, were all announced last night.

The ESB held five hearings today in regard to 127 the campaign violation complaints filed yesterday and early this morning, ESB chair Jennifer Valdez said. Following the hearings, the ESB issued five resolutions that resulted in several campaign violations for the Colton-Mehraz and Guneez-Hannah campaigns.

The first violation issued to Colton-Mehraz was a Class A violation for “deceptive or misleading campaigning” due to the use of a campaign worker’s account in order to personally message people in her friends list and assuming her identity despite her not sending the messages herself. The sanction for this would have been a 5 percent cut to their spending limit if the election went into a run-off.

The Colton-Mehraz campaign also received a Class B violation for “verbal harassment” because their official Facebook campaign liked a post that the ESB said verbally harassed a member of the Guneez-Hannah campaign. The violation would have prevented them from campaigning had there been a runoff.

The Guneez-Hannah campaign was also sanctioned with a Class B violation. The ESB wrote that this was issued because two campaign workers for them posted “harmful” tweets that “provide no further purpose than to demean groups of students” and actively discouraged support for the Colton-Mehraz alliance.

Yesterday, the ESB issued a separate Class B violation moratorium against the Guneez-Hannah executive alliance for “deceptive campaign practices”, preventing them from campaigning for the remainder of the campaign period. The moratorium lasted from yesterday morning until 4:30 that afternoon.

The ESB came to its decision based off of “discriminatory language upon a social media site,” according to the opinion it issued with the sanction. The ESB also referenced a video the campaign put out in regard to the social media posts in question and said it does not align with the rest of their official social media campaign activities.

ESB chair Jennifer Valdez said the social media activity the decision was based off of is a single “like” by the official Guneez-Hannah campaign Twitter. Since the decision was issued, the account has unliked the tweet.

“Hey kids vote @GuneezHannah for UT pres and vp!” the post by @sassysamosa said. “These two genuine WoC have a mission to cater to marginalized and tokenized voices and we’re tired of straight white zionist men in power !!!”

Valdez also said the decision to issue a moratorium against the Guneez-Hannah campaign was done in order to prevent extensive harm to their campaign. If a Class A violation had been issued, Valdez said it would have put the pair over their campaign budget limit and subsequently disqualified them.

“We didn’t want that,” Valdez said. “We didn’t think that was fair and so a moratorium (a Class B violation) was the only way to get the message across without anything significant happening to their campaign.”

An appeal of the Class B violation issued Thursday against the Guneez-Hannah campaign has been filed and a SG Supreme Court hearing will be held tomorrow to discuss its merits.