First to speak on Saturday was Austin Mayor Steve Adler. He was introduced by organizer Conor Heffernan.

“You need to demand of your elected officials that they do what’s right,” Adler said. “And I am here to tell you that in Austin, Texas your City Council is out with you today in force.”

@McConaughey is now speaking at the #MarchForOurLives pic.twitter.com/mMFDjqYAdc

Siegenthaler then introduced Parkland survivor Jack Haimowitz, who will be attending UT next year at the McCombs school of business. Haimowitz stressed that national unity was the ultimate end goal of the movement, to bring Americans together to stop an epidemic of gun violence.

“I’ve been thinking about what I wanted to say at a place like this for a long time,” Siegenthaler said. “So when I sat down write my introductory statements, it flowed in probably an hour.” 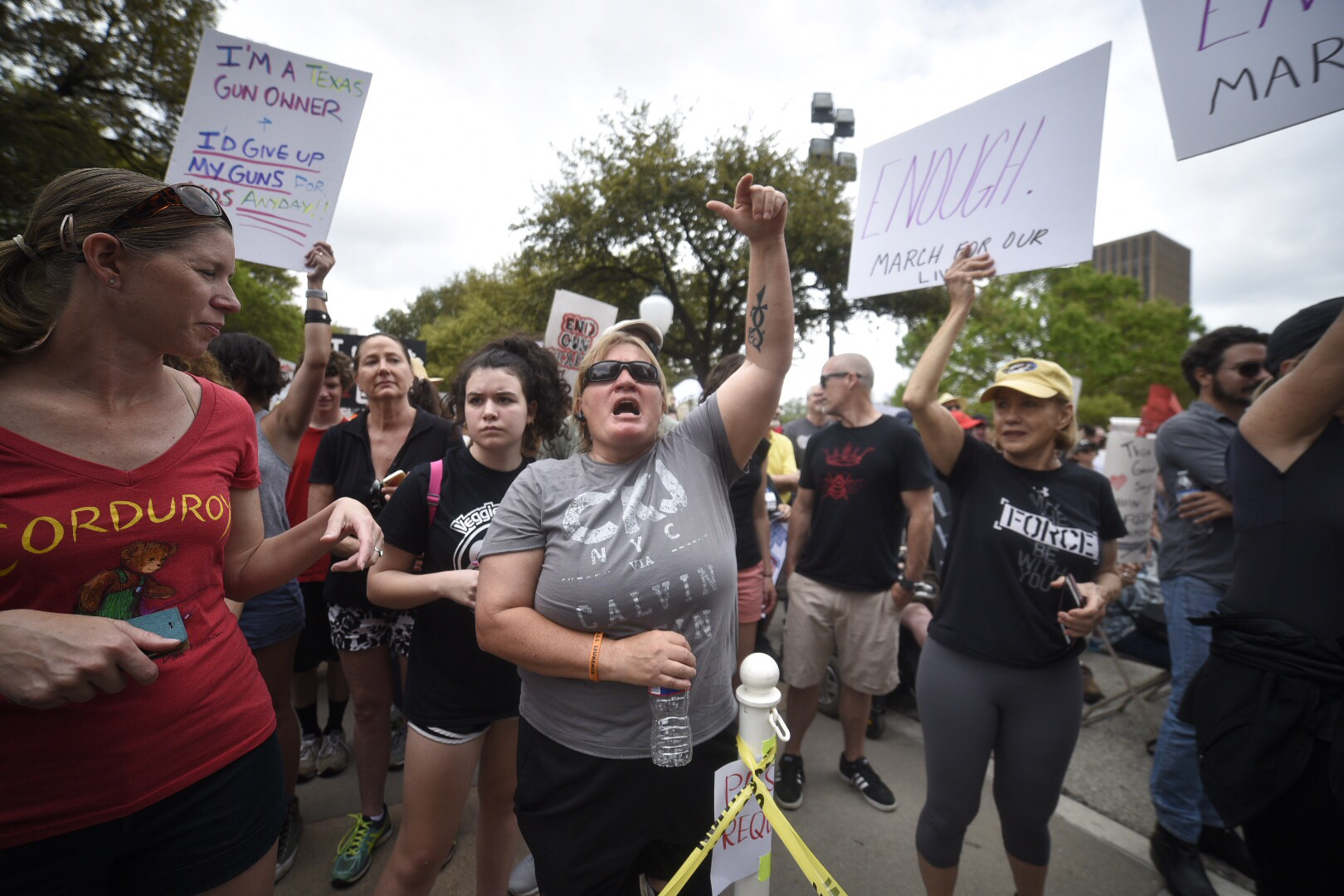 Freshman chemical engineering major Selina Eshraghi was the volunteer coordinator and social media manager for the march. Eshraghi introduced State Representative Gina Hinojosa in a speech that recounted her own tragic experience with gun violence.

“I might not be the survivor of a school shooting, but in October of last year, my childhood best friend took her life on her college campus,” Eshraghi said during her remarks. “Next to her dead body they found the gun that she used to commit suicide, and she was only seventeen.”

Eshraghi said she knew Siegenthaler before the march because she worked on the TEDx Youth at Austin team that Eshraghi led.

“I reached out to her as soon as I saw the event,” Eshraghi said. “I hopped straight into running a lot of our social media communications as well as reaching out to council members and seeing if they wanted to attend.” 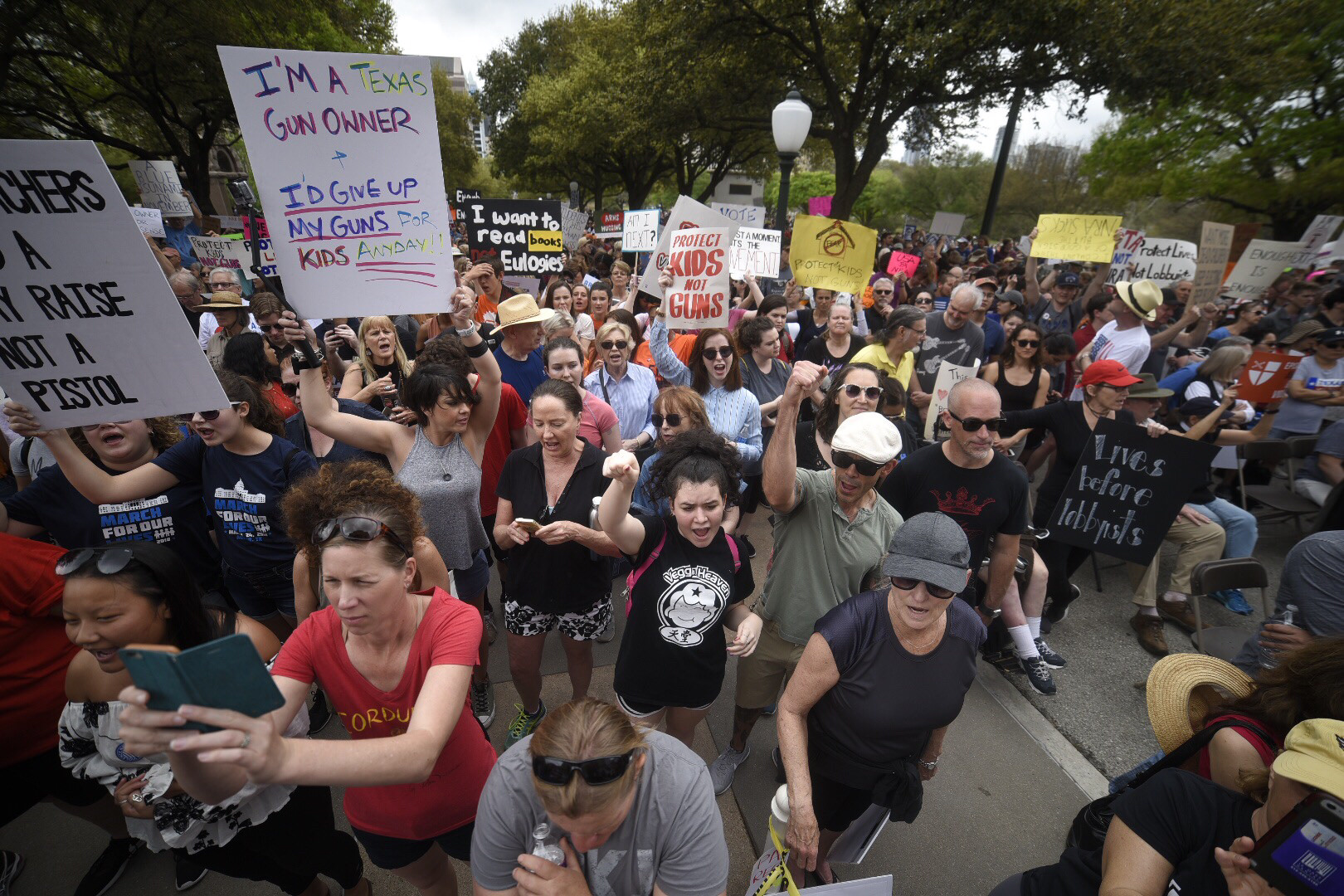 “We had a photographer go up to Representative Eddie Rodriguez’s office,” Kappelman said. “From that photo, I don’t know how, they were able to estimate crowd size.”

Among the packed speaking roster of students and politicians was actor and Austinite Matthew McConaughey, who spoke briefly and endorsed the core tenants of the March for Our Lives movement, including an assault weapons ban.

“His agent called me, and at first they just wanted to know if there was going to be any seating for VIPs and dignitaries,” Kappelman said of McConaughey. “I reached out to his agent to see if he was interested in giving a little talk … they said absolutely.”

At the conclusion of the march, Democratic gubernatorial candidate Andrew White was greeting marchers in front of the Capitol. If he wins the primary runoff in May, he will face incumbent Governor Greg Abbott in the general election.

“Right now we’re standing in front of the Capitol, and on the second floor, over to the right around the corner, is the Governor’s office,” White said. “And the guy who sits behind that desk doesn’t give a darn anything about what we’re talking about right here, right now. You can support the second amendment and also believe in common sense gun legislation.”

Just over a month after the shooting in Parkland, Florida that left 17 dead, thousands of Austinites marched from City Hall to the State Capitol to protest lax gun laws in Texas and across the country.

Good morning everyone! I’m here at City Hall this morning covering the #marchforourlives in Austin for @thedailytexan. Follow @LyleChad and I for updates throughout the day. pic.twitter.com/GuVfFzHd2Q

March is underway down Congress Ave. — current chant “this is what democracy looks like” pic.twitter.com/c3TiIKEQws

More than 800 marches occurred simultaneously around the world, all underneath the umbrella of the “March for Our Lives,” with the flagship event held in Washington D.C. by the survivors of the Parkland shooting.

After brief remarks at Austin City Hall from march organizer Kari Siegenthaler, one of three Liberal Arts and Sciences Academy high school students who planned the event, marchers began walking down Congress Avenue toward the Capitol. The front end of the march arrived at the at 12:25 pm, with speakers including Mayor Steve Adler, Parkland survivor Jack Haimowitz, and actor Matthew McConaughey set to take the stage at 1:30 pm.

@McConaughey is here at the #MarchForOurLives pic.twitter.com/LIIj4a9IW1

Among the marchers Saturday was UT journalism freshman Alyssa Villarreal.

“You never feel safe anymore,” Villarreal said. “Even at UT, those guns that were found in the bathroom, that was not okay, that was scary as hell. Stuff like this has a way of being prevented, and that’s what we’re trying to do here: bring awareness to that.”